"Heidi the biker chick" and her mom survive day 2! 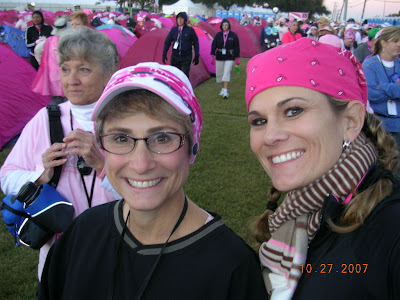 As we drove home tonight we had 46 miles under our belt with 18 to go tomorrow.... (yes you math whizzes...that equals SIXTY FOUR.... when they said the 60 miles was an estimate, they were not kidding!)
Remember, the reason we are walking is to FIGHT BREAST CANCER so what an appropriate picture to start our day: 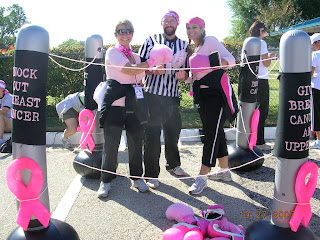 What an incredible day this was! The weather was amazing all day long! We started off bundled up and ended up in tank tops before it was over, so yes, as I sit and type this, I am sunburned (AT THE END of OCTOBER!! Only in Texas!) Our illustrious chaffeur dropped us off at 7am and the first thing we saw was a sea of pink...not outfits, this time.... TENTS! Little tiny pink tents full of walkers! 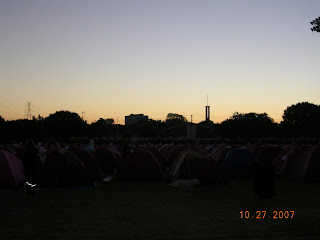 Tiny pink tents full of walkers who slept outdoors after walking 24 miles on day one.... walkers who slept outdoors in a night where the temp got down to 8 degrees celsius (yes, I am trying to convert to metrics in preparation for June!) So Mom and I walked into camp, perky, well-rested, clean, wearing make-up (and looking cute) and with Starbucks in hand! Some may call us cheaters; I call us WISE! There was NO way we could have walked 22 miles today if we had slept in freezing weather in a tent on a sleeping bag! (Plus, Albert would have been so lonely without me!!)

So they scanned us in and led us to the starting gate with all 3000 other walkers! 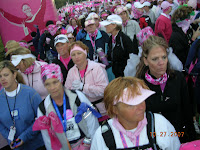 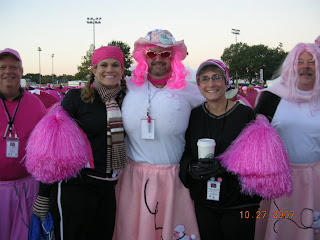 We headed out, excited about the new day, and raring to go!!

We headed out of Addison and began making our way to Carrollton. Our first stop was about 2.5 miles down the way, where they instructed us to PEE AND FLEE! No time for snacks...just hydrate and tinkle! So of course, we complied!! 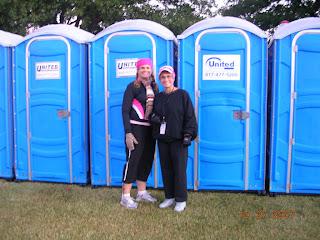 We occupied our time walking by having Danish lessons. Mom thought that the next 22 miles presented a great opportunity for me to begin teaching her some basis Danish phrases... so we started off with "Godmorgen. Hyggeligt at møde dig! Hvordan går det?" She did GREAT with the pronunciation and I was quite proud that I could go from being the student to becoming the teacher! Then we moved on to "en, to, tre, fire, fem, seks, syv, otte, ni, ti" She was counting like a pro within only a few repeats! As we did the months, she decided her faves were Aug through Dec since they are pronounced virtually the same as the months in English ! We were having a blast! And then we got to a major intersection and as we glanced across the street, I saw an inspiration! Anyone that knows me well will immediately get why I had to run across the wet grass, off our route path, to pose for this pic!! 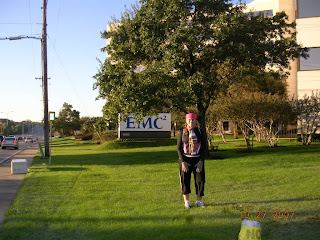 Our next leg of the route helped us to see just how small the world really is....
We were about to cross the Dallas Tollway and mom elbowed me and whispered: "Listen, I think those men behind us are speaking Danish!" I was blown away at ability to pick up on it.. I told her they were not Danish but they were speaking some Scandinavian language! So she had this great idea : She said "Take off your scarf so they will see your tattoo on your neck...and then we will find out what they are!"I could not believe what she was telling me to do! Talk about imaginative! LOL
so, I complied and in LESS THAN THIRTY SECONDS of me taking off my scarf, a voice behind me said "Excuse me, is that a Danish flag tattoo on your neck?" When I told him yes, he of course, asked me why.... so the conversation began! They were both Swedish men and were quite interested in the "story of Kelli & Mads!" We each ended up walking with one of them, telling them our story as they shared theirs. One man had been here with his wife and 2 kids for 7 years...they were from Malmø, Sweden and the other came here 11 years ago and fell in love with AN AMERICAN and married her and stayed! The man from Malmø said that my "story" reassured him that there is indeed HOPE in the world! Of course, I smiled the whole time, as I had a captive audience who wanted to hear about my relationship with Mads!

We walked with these 2 for about 2 miles, under our next Pit Stop and had a GREAT TIME! They complimented my Danish lessons I was taking and my willingness to leave America and assured me that some international company was going to just snatch me up when I got to Denmark! (I hope they are right!) Anyway......we had a great time and of course, when we got to the Pit Stop, we immediately called Mads to tell him all about it!

The day progressed as it should...mile after mile. Blister after blister. A trip to the medic tent to get our feet bandaged... lunch at a beautiful lake in Carrollton. 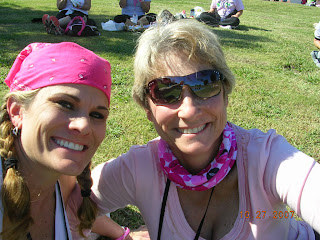 The best part of the day was our walk along a major blvd in Carrollton where it seemed as if the entire town had shown up to cheer us along. There were posters, candy, treats, high fives and costumes... so many costumes! But it was always, ALL ABOUT THE BOOB! 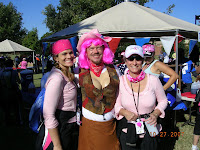 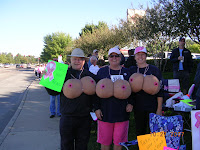 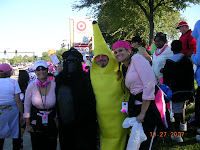 So 24 miles on Friday and 22 miles today...with 18 miles to go Sunday...then we end up at SMU for the closing ceremonies where Jess and Dad will be there, cheering us on. I cannot even fathom how it will feel to walk across that stage, knowing what we have accomplished, but I am sure we will lots of stories to share on Sunday night! We are walking for a world without breast cancer and so proud to be doing this together!
at 9:32 PM

So proud of you, sister. I don't know if I'm more proud that you have walked so much or that you have some kind of Scandinavian radar... you've managed to sniff out every Dane/Norwegian in North Texas!!!