First things first---these are our friends that we met on Saturday-- the guys from Sweden--we saw them first thing this morning and told them we HAD to get a picture of our new international friends! 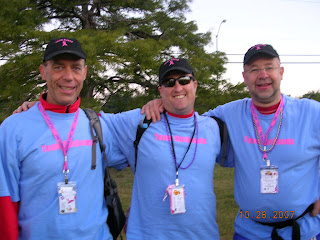 They were walking as "TEAM HUSBANDS" in honor of Cassy... wife of the Swede who had married an American girl....she was diagnosed a few months ago. They were great sports and what a testament to this incredible woman! 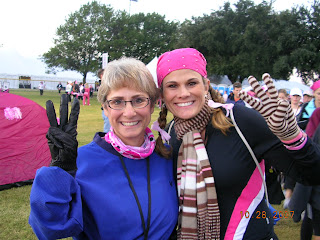 and we were so pumped! Our blisters were wrapped and our spirits were high! We just knew that day three was going to be the best day yet! We were scanned in, we stretched 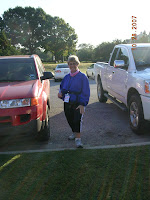 and then we were off... our route took us throughout North Dallas, including the trails surrounding White Rock lake.

Home owners were in their yards, cheering us on and encouraging us every step of the way and then a huge crowd was on the trails of White rock lake, doing the same. We were encouraged and we were determined!!! Even as our feet throbbed from our blisters, we pushed on!! Pit Stop one... we ate, we drank, we peed. Pit Stop two....we ate, we drank, we peed...and then we got to Pit Stop three....Mom said that her toes were bothering her... so we decided to let the medic take a look. 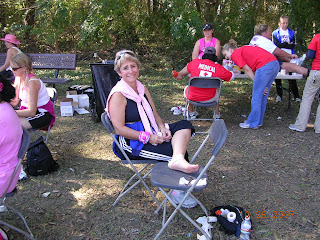 Not only did she have her blisters on her feet, but we were told that she now had blisters that had formed UNDERNEATH her BIG TOE NAIL and the only choice was to lift the toenail and then LANCE THE BLISTERS AND SQUEEZE OUT THE STUFF FROM THE BLISTERS! She was so brave! :o) Who ever heard of a blister under your toenail??!! Well, they took care of her and bandaged her up some more... and that is about the time we saw a team of walkers whose shirts said "Got Blisters" and we started to feel sorry for ourselves..until we read the back of their shirts that said "Shut up and walk...blisters don't hurt as much as chemo!" Wow......so we shut up... walked some more! Even in the midst of her pain, mom pushed on. We split up for a while so she could walk a slower pace and not hurt her toes anymore , but we both made it. And what a feeling that was!!!! 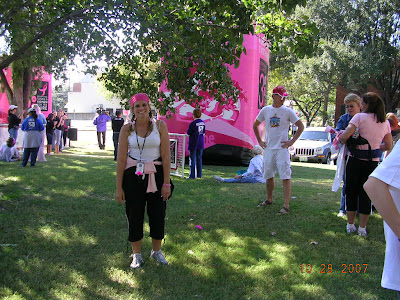 As the music played, the words to "I will survive" are still ringing through my head. These people did not know me at all, they could not tell me what my name was, but they were there, cheering me on, high fiving me and telling me how proud they were of me as I walked those last few feet. It was completely overwhelming. Completely.

I got my "I DID IT" shirt and a pink rose and was shocked by how overwhelmed I felt. 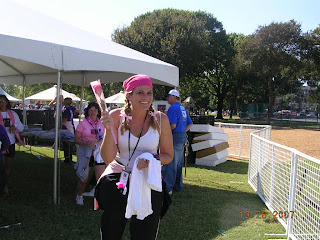 That feeling continued as mom and I were reunited a little while later and as we shared the stories of our afternoon. Knowing what we had just been a part of was such a great feeling. 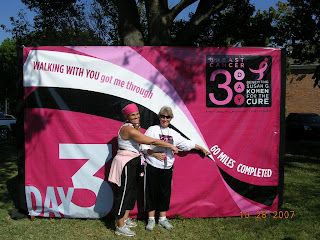 The final event of the weekend was our procession to the "Great Lawn at SMU" where our families and friends were waiting. Dad and Jess were there, waiting for us to celebrate with us and with all the other 2700 walkers. As the announcement was made that our 3Day had raised over $6million, the crowd erupted. Tennis shoes were raised in the air in celebration and then the music began. A group of walkers had not joined us yet, but as the music began to play, they began to make their way toward us.... the WALKERS who were also SURVIVORS. I looked around me at the tears streaming down each face that I saw and realized that the tears were streaming down mine as well and I realized then exactly why I was walking.
Our theme for the weekend was "Everyone deserves a lifetime".......... and although I started this walk idea as a way to honor my grandma, a breast cancer survivor, the memory of my last three months came flooding to my mind. From that first report of a bad mammogram in July, to that second report of another bad mammogram in August to that first meeting with the breast cancer specialist to my sterotactic biopsy in September, I looked at the survivors and realized, THAT COULD BE ME.

Breast cancer is not a disease of the old woman. It knows no boundaries of age or race... and as I looked at the faces of those survivors, many younger than me, I realized how very lucky I am. My results were benign on Wednesday, Sept 19...but these women had not been as fortunate. 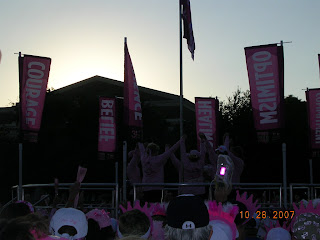 I am clear now, until March, when they check me again, but no matter what my results are, I have realized that my contribution to this fight has only just begun--not as a way to save me, but as a way to save Jess, her friends, my sister and my niece.... AND to save this very special lady who did something this weekend JUST BECAUSE I ASKED HER TO...my mom. What she and I shared the last three days has connected us in a way that nothing else can-- I am so proud of her, but I am also so proud of US. We grew closer as we laughed and whined and cried... we grew closer as we pushed each other on and encouraged each other to drink more gatorade and we grew closer as we reminded each other "DONT LOOK DOWN" each time we entered the port-a-potty! We great closer as WE WALKED and it was amazing.

This won't be my last walk or my last involvement with the Susan G. Komen Foundation-- I am not sure what that means exactly, but I know that this fight will be a part of my future; I just don't know what it will look like.

Thank you to my friend Shelly who encouraged both of us every step of those 64 miles and to my dad who faithfully drove us to and from each day so we did not have to sleep in the tents!! And thank you to Mads, the love of my life, who said at least 50 times how proud he was of me and mom for doing this. He continually encouraged me, from 5000 miles away. His support and his love are what kept me going. We talked about the "what ifs" from my experience in September and we realized how fragile life is. We realized how blessed we are. 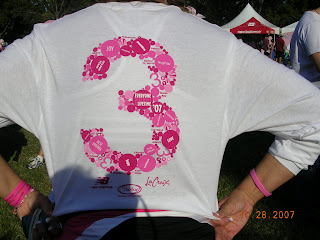 I'm all caught up on all three of your days of walking...and WOW!! It sounds like such an incredible experience for the two of you. I loved all the pictures and it looks like there were so many supports not just walking, but cheering on as well. How very heartwarming to see so many people gather for a great cause. I give you mega props for doing this, and am so proud of you for pushing on for so far for three days! You go Mo's girls! Congrats on a job WELL done!