Mads is in Aalborg today so I have had the run of the house! :o)
I was in the kitchen by 830...and the order of the day is "THANKSGIVING DINNER in DENMARK!"

I had to prioritize my tasks so that I could eventually get the turkey in the oven with no interruptions to its baking! As I started cooking, I began wondering about the reactions of Mads' family tonight at dinner. They were quite brave to submit to a this idea of a traditional Thanksgiving dinner... what would think? Would they try everything and smile politely, even though they were not that impressed? Or would they be like Jess and the pate and say "Nej tak!" or would eat it and wonder where all these wonderful delicacies had been all their lives?! Whatever the answer, they would all be arriving tonight at 1830!

So I got started....A dozen eggs, boiling on the stove, eventually turning into two dozen deviled eggs. Cornbread in the oven, and then after it cooled, ready to be crumbled into cornbread dressing. Giblets, onions and celery getting more and more tender as they cooked. Basic yellow cake in the oven, waiting for all the EXTRAS to be added to it so it could become Paula Dean's "Is it really better than sex" cake! (and btw, no, it's not, but it IS freaking amazing!) With all those things done, I started to clean the bird.........

After dousing him with a healthy amount of "Slap ya mama", den Cajun fugl er færdig!

I went upstairs to get ready for a shower when all of a sudden, I hear a voice calling out "HELLO?!" Seeing that the girls were still sleeping (Shocker, I know!) and Mads was in Aalborg, I knew that meant that someone was in the house. I saw a van outside the window that said "Blomster huset" and sure enough, there was a 80something year old flower delievery man standing in the entry to the house calling out "Mads Nørgaard, Mads Nørgaard" and in his hands was his delivery. 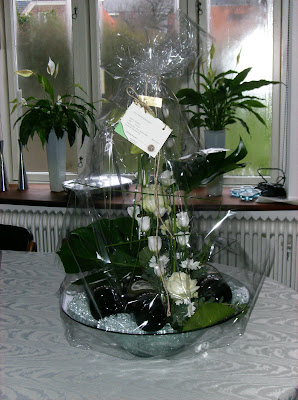 I came downstairs calling out to him... but he never turned around. He just stood there calling out Mads' name. When I got to the ground floor, he smiled and pointed to his ear where I noticed a rather large hearing aid... so he was hard of hearing? Good because I was hard of speaking (danish, that is!). I said "et bord" and pointed to table in the kitchen-- he must have understood because he placed the arrangement on the table and waved with a quick "hej, hej"...and then he was gone.

The card was addressed to "Kelli og Mads Nørgaard" and althought I was totally impressed with the thoughtfulness of the senders, the beautiful flowers and the three bottles of Amarone wine that the package included, I was most in awe of our names written out like that together. I just stood there (like a dork) staring at the card.

After my shower I made my way downtown for a few last minute items for dinner-- I felt like I totally belonged there...walking to the market, smiling at everyone I passed, picking out my items at the market, paying for them with my DANISH MONEY and then heading back home with my purchases in a cloth shopping bag.....it felt so natural, so right.

So now here I sit, watching the OC on television (how is that for surreal?!) and smelling the bird as he bakes...........a couple hours of peace before the rest of the kitchen adventure continues.

I will have lots of pics and stories after tonight, I am sure.
Thanksgiving has come to Denmark!
at 5:59 AM

What a pretty wine basket!

Your Thanksgiving sounds delicious! Your going to blow them away with all the yummy-ness! :o) I'm going to need a recipe of that cake too!

I love how excited you seem about walking to the store and getting your last items. I can feel in your words how new and special it is for you. I miss that feeling so much and it is so refreshing and heartwarming for me, personally, to hear you write that way. Thank you for that!

Who sent the basket? Inquiring minds want to know!! So thoughtful and gorgeous!!

About to start the Thanksgiving prep here myself... but I am NOT MAKING CHOCOLATE PIE!!!

Yes, inquiring minds....who sent the basket??!! :) I can hear the joy in your words! I love you and miss you already! You better come home! lol!