Well, seven hours in the kitchen paid off.......the night was a GREAT SUCCESS!!
The table was set with our new tablecloth that Mads' mom gave to us yesterday as well as Pilgrim placecards with each person's name....take a look... 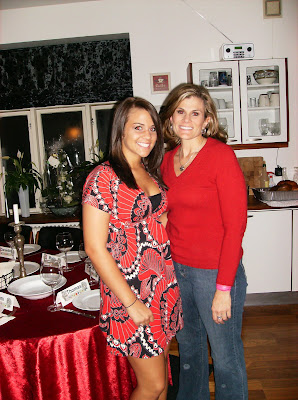 you can even see the 12 lb bird in the background!

Mads' parents, Thomas & Taimi, his siter, Trine, her husband Mogens and their 12 year old daughter, Rebecca all joined the four of us for Thanksgiving dinner tonight. As everyone sat at the table, I began to explain to them what all the food items were on the table...and then joked that if they tried everything but were still hungry afterwards, they could stop by McDonld's on the way home. That broke the ice and everyone was relaxed. I then told the story of why we have Thanksgiving in America....why it was started with the Pilgrims and Native Americans...and why we have it today (the Macy's parade and football! LOL). Mads translated everything for me so that his parents could understand everything. I was too worn out from all the cooking and preparations to even think about attempting to tell it all in Danish!

Within minutes of dinner starting, the compliments came...and I am pretty sure they were sincere. His dad even took seconds. The deviled eggs and the giblet gravy were the biggest hits! 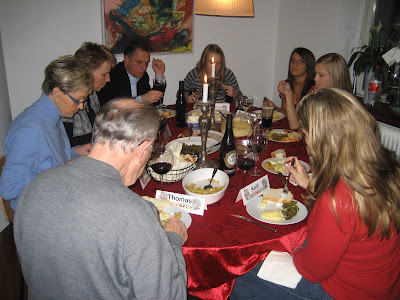 Dinner lasted about 45 minutes and then we moved the guys and the girls to the living room so that we could clean up dinner and prepare for dessert. 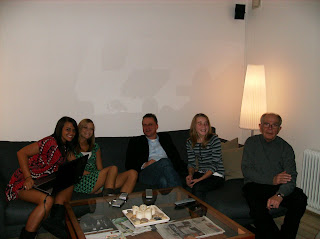 Trine and Taimi jumped in and took care of all the dishes for me--it was awesome! It gave me a chance to get the dessert and coffee ready. I had made a Paula Dean Earthquake cake last night so we had lots of that left, plus we had the new dessert I made today. His dad and Mogens both thought it was pretty comical that it was called "better than sex cake"! They went on and on about how delicious it was.... In the words of Thomas "rigtig, rigtig godt!!!" I felt pretty great throughout the entire night.

Around 9, we began to wrap things up so everyone could head home, but Jess, Danielle and I made shopping plans with Rebecca for tomorrow. We plan to meet her around 1 and spend the afternoon together! Should be a fun afternoon!

So now, Mads and I have hosted our first family dinner in our home together......and it could not have been better. His family was amazing...and as I told Thomas when they left, I really appreciated him being such a "fin fyr"..... because he tried everything! :-)

I prayed when I left that our days here would pass slowly... and I must say that so far, it's been exactly that...nice and easy and slow! I have a feeling that once we get to Copenhagen on Thursday, things will start moving faster, but for now, I am pretty happy with my nice and easy life in Herning...........

I love the name tags!! I'll bet you were exhausted after all that work and had no trouble sleeping tonight.

Joe bought a 13-lb bird for us; I'm worried now that it will be Birdzilla since your bird looks HUGE and you fed 9 people with it.

I miss you to death.
Love you!!

The place cards are so cute!

So your first Thanksgiving in Denmark was a success!

I've noticed, now matter where you are in this world, things always seem to move slower outside the big cities. I hope Copenhagen surprises you and moves slow this time. :) If you'd like Michael and I can be REALLY boring on Saturday just so the time slows down for you ;)