It's been a rough week..........
Picture this-- Sicily, 1947.... oh wait, that is from an episode of Golden Girls....back to my story... picture this-- you marry the man of your dreams on a Friday afternoon and then you board a plane the following Sunday morning and put 8000kilometers between the two of you....knowing you won't see him for TWENTY FIVE DAYS........that in itself would be enough to make it a rough week.

Then throw in a "very severe kidney infection" (the dr's words) and you have my last five days.

Oh wait....did I mention the SHOT IN MY BUTT that I had to get on Tuesday because the dr said the infection was so bad that they could not wait for pills to get into my system??! That was like the bonus of the week!

anyway......this post is not really about my own private pity party (which my mom told me was not very attractive! LOL) It is about what (or who) gets me through days and weeks like this.

Whether you are an animal person or not, I hope you can recognize the important part that our pets oftentimes play in our lives. I have had Emmitt for almost ten years and on Mother's day, it will be three years since Albert joined our family. 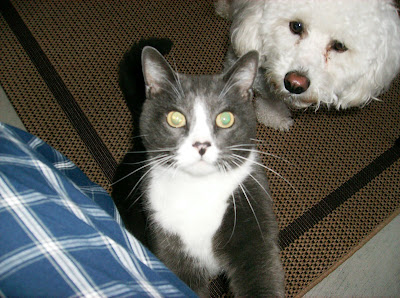 Emmitt was a stray that I found when I was working at a youth center in Wichita Falls TX.... and yes, I named him after Emmitt Smith--that was a year when I used to actually watch the Cowboys. 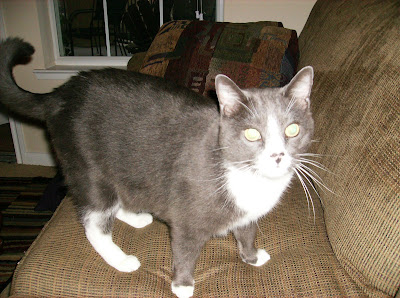 Albert is a registered Bichon Frise that I got for Mother's Day in May 2005 and yes, he is named after my other favorite fuzzy white haired person..... 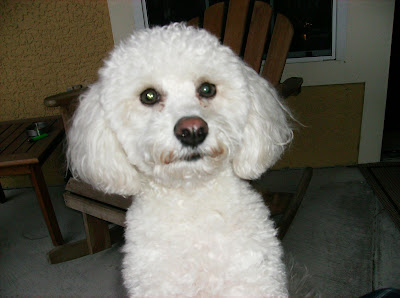 This week I was on the couch alot-- both because of my "feeling sorry for myself because my husband is 8000 km away" and because I was on the heating pad trying to find some relief in my lower back......and I can tell you that I was not alone. Both of them were on that couch with me. Emmitt above my head on the cushions, and Albert laying on my stomach..... It's like they knew I needed them. They are always pretty darn close to wherever I am in the apartment (just ask Mads....he can hardly ever see me on the webcam without seeing the 2 of them right there as well) but this week, it is as if they knew I needed them.

Jess worked late almost every night this week so it was just me and the boys-- and they took very good care of me. Yes, I still felt like crap physically as the medicine has SLOWLY started to work on killing the infection and yes, my heart still ached about 23.75 hours of each day as I missed Mads.... but I had comfort. If you have ever had a pet like my Albert or Emmitt, you understand. If you say you are not an animal person, I think it's because you have not found the right animal to love. These guys are two of the most loyal, most amazing creatures I have ever encountered. They love me.... and I feel it.

Even now, as I type this, Emmitt is sitting on my right.....Albert is on my left (well more half on my lap, half on my laptop)...not because I put them there, but because they chose to be there. They like hanging out with their mom! 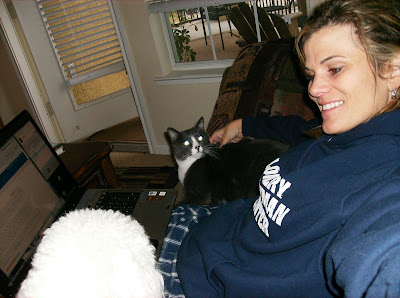 (no I have not showered or washed my hair! As if I needed to point that out!) Thank god for them....because I have a feeling that in the next six and half months, I am going to need them a lot.

Speaking of the next several months-- the plan as of now is that Emmitt will go home to Herning with Mads on March 23...and then Albert will come with me on June 16. They will miss each other for those 70something days in the middle but it's the only way we can get both of them over there...because I am sure you already figured out...there is no way I would leave them behind. That is a mandate by our wonderful president, you know!

So woman's best friend? Yes, I think so. They go to bed with me when I go (no one has told Emmitt he is a cat, rather than a dog)...they comfort me when I am blue....they entertain me when there is nothing on television....and best of all, they save my seat when I go to the kitchen to refill my coffee cup!! 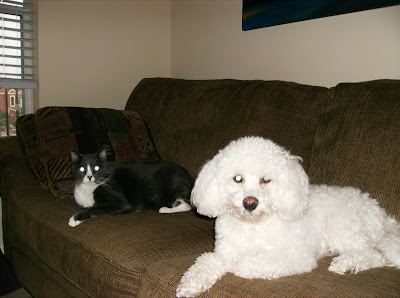 When people say they don't like animals I am stunned... animals are GREAT! The only thing they expect from you is that you feed and take care of them, and in return they sit in your lap and love you. Who wouldn't want that??

Hope you are feeling better!!!

Okay...I love animals :-D They can really make you feel like a you have a spiritual link to their world. I have never had a cat, but I know that dogs become like your "kid". They understand many, many words, they instinctually comfort you, and they are always looking to have a good time with snuggles or play.
(Even horses and donkeys love attention and a good snuggle!)

Generally, I've found that people who dislike animals say animals only ACT like they love you because you give them food. However, if you have bonded with animals and feel their affection an that deeper level, it just can't be explained to those that haven't felt it.

Kind of like how some people may roll their eyes when you say your dog "smiles" at you by looking in your eyes and pulling back their lips while panting. YOU see the sparkle in their eyes, and the perk in their ears, but not everyone "gets it".

Also, I have hung with Albert, and he is one good-natured, fun little sweetie :-)

I have a Bichon-Lhasa Apso mix. She is the sweetest puppy. Where would we be without our precious animals!

Yikes. Kidney infection? Must have been all that cold weather in Denmark messing with your thinned-out Texas blood ;) Glad to hear that the meds are working. Your poor nether regions have been subjected to all sorts of insults since you made that fateful trip to Houston.

We are cat people now (as you know). We had a dog for years -- who had 23 pups in toto -- and I just got really tired of cleaning up poop. At least cats (and kids, eventually) take care of their own fecal matter.

But we now have a long-haired chihuahua grand-doggy who LOVES to come to granny's house. We love her to death and her poop is her parents' responsibility.

Emmitt and Albert are such sweet looking babies. It is incredible to me the way an animal comes into your life and somehow becomes your best friend and knows when you hurt, when your happy, when your sad, and even show emotions yourself.

Can't wait to meet them too :)