Last night on 20/20 they aired a documentary that looked at people all over the world and how they defined happiness. After interviewing people from all races, all classes and from all parts of geography, they came to the same conclusion that the research has found over the last twenty five years-- 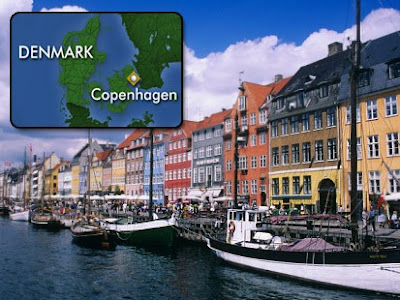 Disney World claims the distinction of being "the happiest place on earth," but if you're really in search of human bliss, you'd be surprised where you'll find it.....amidst dreary winter days where the sun rarely shines and some of the highest income taxes in the world, the Danes proclaim themselves as the happiest, most content people on the planet... but why is that?

I have heard about these polls that social scientists conduct, where they measure different elements of a person's happiness... in fact, as soon as I first told my family about Mads and Denmark, someone sent me a link to a news article from last year that also touted Denmark as the happiest place on earth......

So I started thinking about what determines my happiness... and that of the Danes....specifically one Dane. Mads and I talked today about the "shitty weather" in Denmark that they experience for many weeks in the winter and in the same breath that described the dreariness, he was talking about what happens when spring appears. He almost sounded breathless as he described it and I could hear in his voice how happy the arrival of a new season was to him. Coming from a state that has one season-- Summer with a day of fall, a day of spring and a week or two of winter--I don't have a clue what it means when he talks about the 4 seasons, but I cannot wait to experience it for myself.

I also thought about how much time they spend outdoors.... biking to various locations, walking to the market.... just being outdoors--even in the frigid air in November I remember my brisk walk to the market to buy my groceries. It was exhilirating and refreshing (even though it was cold)...I did not dread it in the least the way I would dread driving to a super Walmart to buy my groceries. It was a totally different mentality....a different attitude.

(And one thing to note--it's not the weather that really is the problem because my husband says there is no such thing as "bad" weather...only people who don't know how to dress appropriately!)

I also stopped to think about the type of economy that Denmark has as opposed to ours-- every one that finds out I am moving there focuses on the high tax, but none of them stop to consider the fact that in Denmark, there is equalized access to things that really matter...health care, medicine, college... all things that in our country are only given to those with money. Our middle class goes into debt because of expenses related to health care, medicine and college, while our poor rarely get to experience any of them. There is no equality in access. Rather there is a system that is based on a continuum of disparity-- and eventually it leads to a system that causes desperation. When you don't have money to take care of your child, you become desperate... desperation leads to impulsive behavior....impulsive behavior often leads to crime. Care to guess the difference in crime rate in the US vs. DK? Let's just say that their 32 murders last YEAR are about equal to a couple of weekends in Dallas, Texas.... now you want to dispute the high taxes?

So what really does make us happy?
Is it the same for each person or do we each have our own list?
And is happiness the same as contentment?

Happiness has nothing to do with stuff, that much I know for sure. We are surrounded by communities where people have alot of "STUFF" but are some the most depressed, dysfunctional, unhappy people you will ever encounter because the more stuff you have, the more stuff you think you need. (shoes don't count!!) 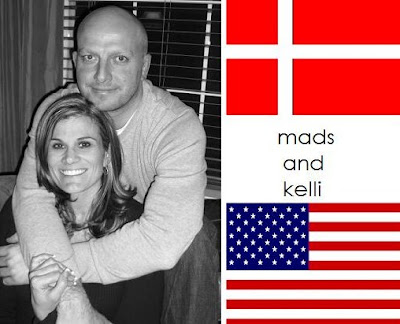 I am sitting here on a Sunday morning with a big smile on my face and thinking to myself how incredible happy and lucky that I am to have Kelli in my life and as my wife. A post like this makes my day and also makes me realize that no matter what kind of obstacles we will meet in our future then we have each other, our love for on another, a possitive way of thinking and be happy about what we have, that so many people on this planet don't have. So if you are feeling "blue" just think of something good in your life. "DON'T WORRY, BE HAPPY"

Mads line about no bad weather is so true. But then I started to think about the 6 springs that I lived in tornado ally and had tornadoes as close as 1 mile away on a weekly basis and decided, that indeed was bad weather. No amount of wind and rain gear can prepare you for that! ;o)

I've had many conversation with Taxi drivers here about their life and how much they love it here and their quality of life is so amazing. That gives me a warm fuzzy feeling. I also LOVE LOVE LOVE that I RARELY see a homeless person. And I LOVE LOVE LOVE how safe I feel here. Its an amazing feeling to be able to walk from somewhere at night (or the afternoon in the winter) by myself and never feel scared or paranoid.

The thing I loved about that 20/20 story was the garbage man who liked being a garbage man because he only worked 5 hours each day and it gave him time to coach his daughter's handball team.

It must be great to live in a country where your worth as a person isn't defined by your career.

As for your "fairy tale life" together... I think that people who don't understand the dynamics of a relationship can only see the extreme elements of yours and are overlooking the day-to-day growth and struggles that you have experienced over the past year. They only see what movies and books have romanticized and idealized about long-distance relationships... if they only knew the work you two have put into your marriage and relationship.... if they only knew!!!

I love you both!!

"Happiness is measured by moments of connectedness, love, and joy." All these things can be exchanged only among people ... mere objects will never bring true happiness!

Happiness glows from both of your faces in every picture we have seen. It is wonderful to see the love you two share with each other. We wish you only the best of everything life has to offer.