Over the last several months I have thought alot about my move to Denmark.....thinking about the changes that will happen to my normal, day to day life. Even though I have lived all over the great state of Texas, I have still lived in the same state all my life, so I wondered...what things will be different? Which things will I like better and which things will make me miss Texas?

I have told Mads that I am pretty sure I can adapt to just about anything...and that I would be totally open-minded to most of what was presented to me in the upcoming months and years. I could adapt to walking to the market with my cloth shopping bags to get only a couple days' worth of groceries at a time. I could adapt to eating my sandwiches open-faced on dark bread with a fork and a knife. I could adapt to drinking my beverages without ice (since the refrigerators don't have freezers or ice makers). I could adapt to living in a house with no bathtub (although it DOES have radiant heat floors!!) and I could even adapt to those little things like a new language and currency system, but I could NOT live without a clothes dryer.

Mads, like most Danes, has a great front-loading washer in the basement... but he does not have a dryer. Mostly because the Danes are so environmentally conscious and they realize that hanging their clothes to dry on drying racks indoors during the winter and on the clotheline outside in the summer is just better for the environment. This not only helps the environment, but forces you to think ahead as you have to give the clothes plenty of time to dry if you want to wear them any time soon.

Now, I am as concerned about environment and the depletion of the ozone as the next gal, but there are some things that a woman has for 37 years that she just gets used to....and for me, one of those things is clothes dryer. Mads teased me and said that before I moved, he would find me a "tumble dryer"....and I trusted him to take care of it! :o)

He actually planned a shopping trip this afternoon to go and look at a dryer that a local appliance store advertised on sale this week. He took his parents with him to help transport it in their car...just in case he bought one! Well, he called to tell me that when he got there, they were already sold out of the model he wanted and would not get more in until February. So I asked if he was getting a raincheck... and he said that before he even ask the salesperson for a raincheck, his dad pointed to another dryer and asked why not look at that one. It was quite a bit nicer than the one he had chosen initially, which meant it was also quite a bit more expensive. Mads told his dad that was just more than he had planned to spend, so we would just wait for the others.

Then Thomas, my svigerfar (father in law) did the sweetest thing.... he gave Mads the money to cover the difference in the one he was going to buy and the other, nicer model and said it was his gift to me to welcome me to my new home in Denmark. He said he wanted it to be there, ready, when I arrived in two weeks. So now take a look at our basement as of this afternoon..... 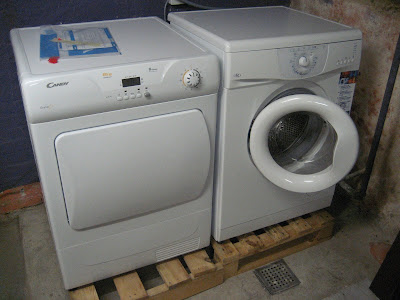 so bring on all the new things I will encounter when I move to Denmark... I am armed with a tumble dryer so I can handle anything!!
at 5:52 PM

I really think that is the sweetest story ever...

When I was in Europe for five weeks in 2006, I had a taste of the laundry thing. It really didn't bother me that I had to wait for things to dry...what I missed was being able to "just toss my clothes in the dryer" when they were a bit wrinkled or needed a freshen up between washes.

You know how it is, your favorite shirt is on the bottom of your hamper, all wrinkled...but not all THAT dirty...so you grab it, spray a bit of febreeze on it, throw a dryer sheet in there, and voila...5minutes later, it's like new!

I am not sure what one "American" things I'd need...should I ever move to Europe, but I would hope to have a father in law as sweet as Mads' dad!

How sweet of your father in law! (And of Mads too. They are both doing such a good job to make sure you have everything you need/want to make your move to Denmark easier.

I'm interested to know what other things you think you will miss about Texas!

Awwwwwwww ... that's so sweet I got a little teary-eyed. Congratulations on the new tumble dryer!

Yay!! What a sweet story! I told Wes that is my one stipulation when I move there. :) That is a great looking set! Is it very expensive to buy a dryer?

That washer/dryer set is quite fly! Way-to-go Mads and Dad of Mads!
I actually line-dry quite a bit b/c it helps clothes last longer -- my size is tough to find.
I do use my dryer for towels and such. It would be weird to be w/o one -- also many homeowners associations don't allow outdoor clotheslines which is absurd. Like what would happen if I saw my neighbor's knickers?* It's not like the sun would stop shining!

I dry just about everything imaginable. I do about five loads of laundry a week. If I sense that one of the cats is cold, I'll throw one of his bed blankets in the dryer to warm it for him.

I can't imagine living without a washer OR dryer, either. A dishwasher, now that I could take or leave. Don't think I could get on without my hair dryer, either. I sure wouldn't make it without my oscillating 12" fan that I turn on for eight to nine hours every night so I can sleep.

Having said that, I love your dryer. I also like that you can see inside it while the magic is happening. I've never had one like that and I think it would be cool.

What a thoughtful svigerfar you have.