First of all, let me explain the title... I am in Herning Denmark at 9pm my time watching the LIVE game between the MAVS and the Pistons... Of course, the commentary is in Danish, but who cares??? I am in my new living room with Mads AND Dirk... LOL Who would have ever thought that was possible?

I arrived into Billund airport late Thursday night..on a plane from Paris Charles de Gaulle Airport that held 18 people (17 Danes and me)..... and as we arrived in this TINY plane, it began snowing fiercly...so not only did we feel every ounce of turbulence but also our plane was so small that it was not the kind that could pull up to a gate to park...so instead it parked away from the gate, and we walked to the terminal in that same snow we had just flown through.... What a way to enter Jutland...

Friday was a restful day. We slept in and then just hung out and watched it snow throughout the day. As the day got later, we began preparing for our dinner party that evening....three of Mads´closest friends and their wives/girlfriends were coming to dinner at 630 and the menu was Quesadillas (made with flour tortillas brought across the Atlantic.) We had a GREAT Time...the rule was that everyone had to speak English, but that lasted about 90 seconds...but I actually held my own! They were all delightful and the party did not end until almost 1am!

Saturday was our busy day ...we woke up and headed to Copenhagen as the next day was our nephew, Kasper´s,baptism in Lyngby. We drove through a snowstorm and it was amazing to this Texas girl to see traffic moving along as normal....whereas in Dallas, if we get snow, life and traffic seems to STOP!!!

First stop was coffee in the city with Kenneth and Christina, our friends who were 2 of our witnesses at our wedding. We had a great time and while we were together, we even planned a trip to Luxembourg with them in late June... We left them and headed to Lyngby to have dinner at the Pates! It was so great to arrive there... Nichole is my Texan friend that I met through her blog when I googled "Danish lessons in Dallas" in September...and we have become great friends since then! We talk electronically every few days and have met each other once, in November, but being in their home last night was like being with friends we have known for ever...not only a few months! We had a GREAT dinner... shared Danish-American comparisons, talked about all the places we want to visit in Europe and just relaxed over a great meal! 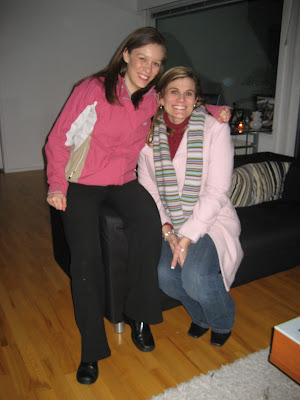 We left Nichole and Michael´s and headed for Mads´brother´s house where we were spending the night. They had the house all set up and decorated for the luncheon to follow the baptism and it looked great...they had worked so hard all day preparing for the 20+ guests so we just sat and caught up for a bit before everyone headed to bed so we could be up early to prepare for the baptism and luncheon.

We arrived at the Lyngby Kirke and I was in awe, as I am every time I enter a church in Denmark. 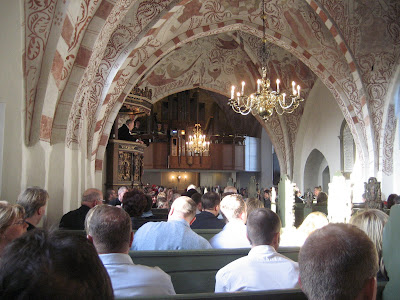 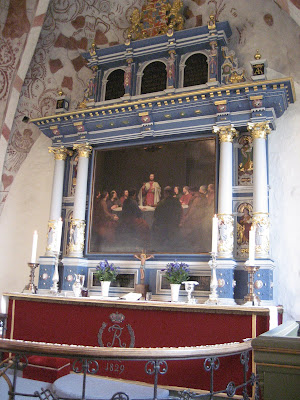 The baptism was absolutely precious....very different from the sprinkling that we do in America...Kasper was a doll in his baptism dress and did so great! 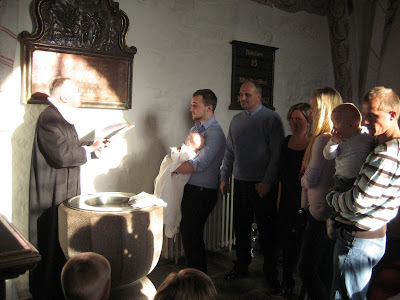 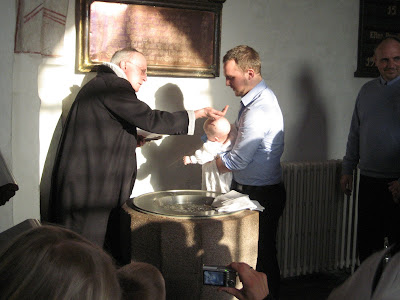 After the service we headed back to their home for our Danish frokost (which I have learned means a 4 hour process, at a minimum!). It is great...the Danes really do spend time around the dinner table as a family, visiting and relaxing. I always get frustrated when I spend hours making a meal that takes less than 15 minutes to consume...that will not be the case when I move here! My dad will love this, I know....his favorite thing when we were growing up was to make us sit at the table after we inhaled our food for "fellowship"....So dad, you will have all the fellowship you want when you visit me in DK!!! 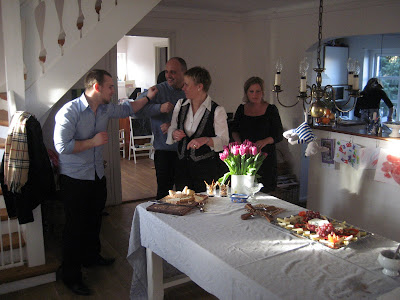 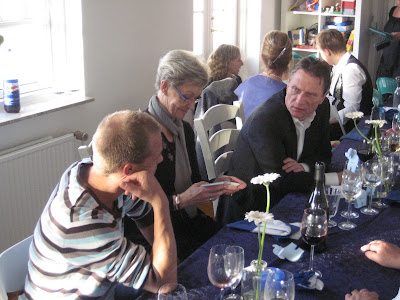 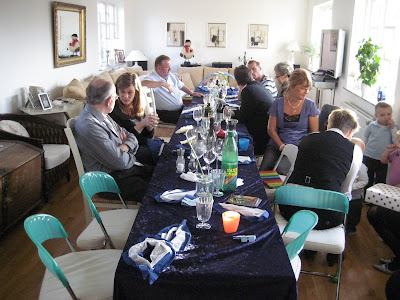 Ok.... I need to get back to the game... .will write more tomorrow. I have pictures of the house to post with all the additions since me and my STUFF has arrived....plus we are driving to the North Sea (about 45 minutes away) tomorrow so we will have pics from that as well!
at 2:01 PM

1. Is that a mouse hanging off the chandelier?

2. If you crop out the people besides the priest and Kaspar's dad in that first baptism, that is one AWESOME shot. The sunlight, the facial expressions... WOW.

Sounds like fun times in the DK! I totally agree about meals being a time of fellowship. Questions: How long is the avg. lunchbreak for workers? Do they work a standard 8 hr. day? What time is dinner usually?

That church is totally gorgeous, by the way. And we miss you! Say "hey" to Mads, please!

Glad you are having some snow, it was got into the 80s here today!

As soon as we saw the game on TV Michael said, QUICK! Text Kelli!! I'm glad you were already watching it :)

You have had SO much going on! Thank you so much for taking a few hours out of your BUSY schedule for us! We had a really great time. I agree with you in that it seems like we have known each other for much longer then we have.

Can't wait to see pics of your hjem!!

Yes that is a mouse on the chandlier...lol...Shelly, you are the only one who would notice that! (And I have no clue why it is there!)

At the office Danes usually only take a half hour for lunch... that helps them to get their 37 hour work week accomplished easier so they dont go in until 9ish and home before 5 to be with their families! That is why everything closes so early here! No 24 hour shops!