Our last day in New Orleans was just as great as those before it. It was filled with fish (not that we were eating THIS time!), powdered sugar and a little music!
We slept late and then headed to the Aquarium of the Americas....one of the top three aquariums in the United States. 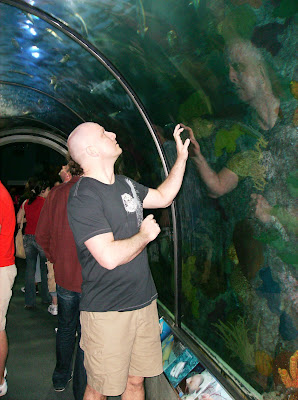 Looking at fish can make a person really hungry and when you are hungry in the middle of the day (or night!) in New Orleans, there is only one solution....BEIGNETS at Cafe du Monde, a 24 hour outdoor cafe with about 3 things on the menu--Chickory coffee, beignets and powdered sugar! It is another New Orleans´ tradition with which we fell in love! 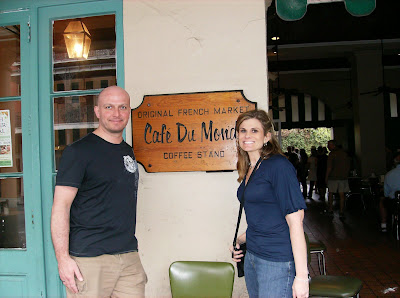 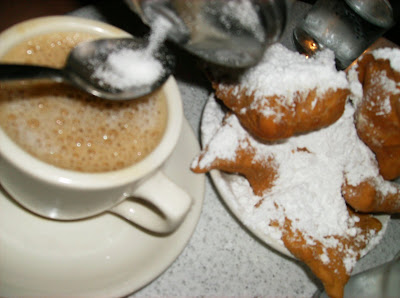 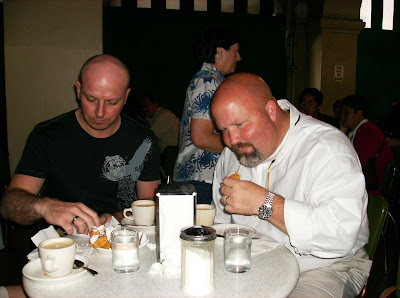 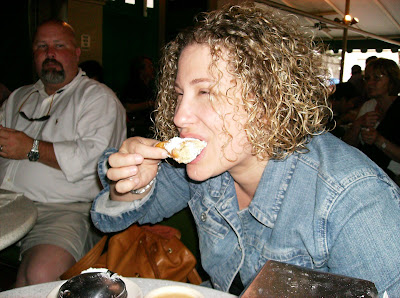 After brushing off our clothes and licking our fingers, we made our way back to the hotel...the long way. We window shopped a little as we strolled along the streets of New Orleans...saving our energy because we knew we would need it later that night! And no matter what Steve says, it was not because I gave us bad directions that caused us to walk about 37 miles to the restaurant!! It was because we had dinner reservations at Mulate´s ....where we planned to introduce Mads to Zydeco dancing and his first ever FRIED SEAFOOD PLATTER! 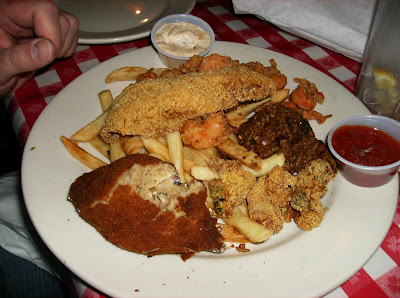 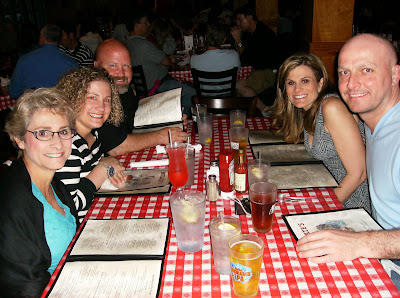 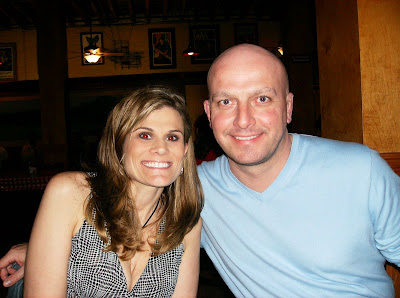 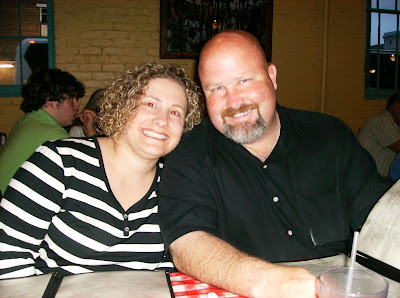 Mulate´s was obviously a local favorite because it was packed! Just about the time we placed our orders, the band began to warm up! Toes began to tap....fingers began to snap and then before we knew it, Mom and Dad were out on the dance floor! Now, I have to admit that when Mom has told me stories about the two of them taking dance lessons and dancing together on the many cruises they have been on, of course I believed her that it was all true, but I never really thought about whether they were good at it or not.... 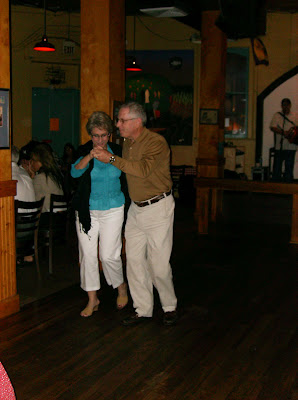 Well, last Tuesday night, I got to form my own opinion and my opinion is "WOW!" They really ARE good! Not only were they dancing....but they were dancing to CAJUN MUSIC! Not exactly an easy feat!
We even called MoMo Fontenot during dinner to let her hear the incredible music playing in the background. 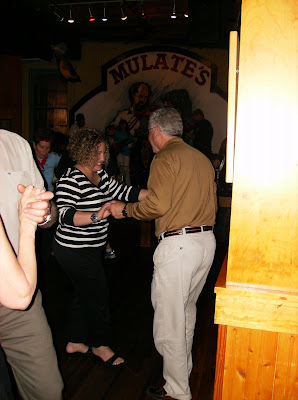 It was the perfect night to end our wonderful vacation! And I do believe that after we all sat down from dancing, the question was posed... "so where are we going to go together next year?!"


Thanks again to Mom and Dad from me, Mads, Jennifer and Steve for an incredible trip.....one we will always remember! And the best part is that even after our Cajun Family adventure, Mads STILL wants to be a part of us!!

The beignets looked fabulous! It has been years since Ellen has had them and she is drooling over the pictures!

Glad you all had such a great time. We're sure that Mads is grateful to be a part of your family.

Aww..how cool! Yummy food and the dancing looks so fun!

That pic with Mads looking at the fish through the glass tunnel is very artsy, with his reflection looking back and all...

Good heavens! They put more powdered sugar on those beignets than I use to ice an entire 8" cake!

So ... did Mads REALLY like all that seafood fried like that? When I moved here from Michigan 34 years ago, I couldn't believe that I couldn't find a single piece of fish on any menu anywhere that wasn't fried. I found it very strange.

Sure looks like you guys had the Best Vacation EVER!

I'm also curious, did Mads like the fried food?

We brought a can of Cafe du Monde with us when we moved to Denmark! :) It was yummy, and all gone now.

Michael and I MUST check out New Orleans with our own eyes. Seems like a really FUN place!!

Hi Kelli, thanks for finding my blog. I'm always wondering if there are any texans living here.

I think that you would love it here, the only drawback (so far) is the weather, esp when you come from warm, sunny Texas.

I have been reading your blog and it seems like you already know danish. That's a major plus, keep up the good work.

Good luck with your move, it a pain but well worth it.

Hi Kelli -
I'm glad I found your blog a couple weeks ago. You have a great family and it's fun to read about your adventures with moving to Denmark. You're definitely an inspiration to me for learning Danish and knowing good things do happen... even if it takes a bit longer than we really want :-)