I was at this place today.

Can you tell from the outside what place this might be?

In my opinion it looks kind of like the offices of the I.R.S., a mental hospital that is in desperate need of a fresh coat of paint, or the building where they house all those people awaiting extradition to a foreign land due to a crime they have committed. 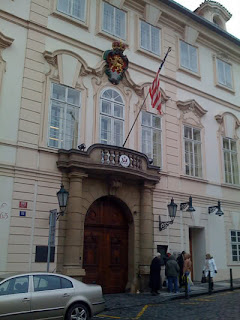 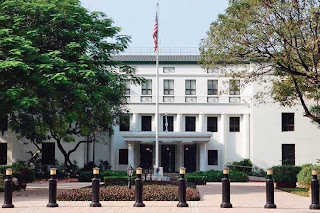 because the place I visited was the American Embassy in Copenhagen.
I understand the 12 foot high iron fence all around it (well, I sort of understand it...) and I understand that maybe the US did not have a lot to work with when they were given the plot of land and building materials, but not only was I not impressed with the building, but I was a little embarrassed to take my 30 students (who are going to Seattle in October to study) to this building as their "first taste of the US".
_________________________________
First: The Process BEFORE the Embassy
We took a bus (4 hours) from Herning to Copenhagen at 6am this morning.
Our appt for their visas was at 10am, the LATEST that they would offer us since we are group. Seriously? Do all the "group workers" at the Embassy get off work at noon or something? (Even when I explained we were coming from 4 hours away, they would not waver....)

I had worked for the last 6 weeks, gathering all the necessary materials and documentation that the students would need to secure their visas for their time in the US, so we showed up..READY.
_______________________________
Second: The Process AT the Embassy
2 Guards met us at the street, barked out instructions på dansk (yes, they were Danish) and then made it their task to make sure that we were in a straight line, 2 by 2, and when someone stepped out of the straight line, they REMINDED that person to get back... PÅ Dansk and not in the most polite tone.

Never once did anyone say "Welcome to the American Embassy" (not even to the American!)
Security was easy enough... typical scanning. Nothing to report.
____________________________________________
Third: Entering the "waiting room" for our appointments
Not only did the Embassy LOOK unattractive, but it SMELLED like an old folks' home that had been covering up the smell of pee with disinfectant too many years. It was awful. Honestly. I am not exaggerating... it was such a disappointment. Old felt chairs to sit on. Old disheveled magazines to look at. And 1 puny American flag in the corner. I don't know what I was expecting, but I know I expected it to look WAY more patriotic and welcoming than it did...

We knew that it would take about 2 hours for all 30 students to get through their appointments, but after this experience, all I can say is that I HONESTLY felt like I was at the DMV with 30 people who needed drivers' licenses. (American friends know just what I mean).

They are the ones that scheduled our appt, right? Our 10am GROUP APPT. And would you like to guess how many workers they had handling our group? What's that? Yes, my American friends, you are exactly right...ONE!!!!!! ONE WORKER FOR OUR GROUP APPT.
However...she was AWESOME!
Sooooo soooo sweet and friendly as she called up each student.
____________________________________________
Fourth: The Visa Appointments
I am not a mathematician, but I am quite certain that we got the short end of the stick on this one.
We drove 4 hours, remember? (Wait, we actually drove 8 in all!)
We checked in.
Each student had his/her "appointment" regarding the Visa Application.
And guess how long each appointment took?
TWO MINUTES, tops.
Maybe more like 1.5minutes....
Of course, the time in between each appt as they shuffled papers and stapled things in piles and unstapled to sort and then restaple took a while, but the time that the kids actually stood in front of the employee, getting fingerprinted and questioned was no more than 2 minutes.
____________________________________________
Fifth: How to get a Student Visa to the United States of America
I had told the kids all about what they might be asked during their "interview"...mainly to warn them not to be silly or joke about things that would not be considered funny by someone deciding if they could come into the US to study or not.
So they were ready!
Well, after they were fingerprinted, they were asked questions regarding their study trip...well ...sort of.
I told them they would be asked a series of questions..
But most were asked ONE, a few were asked TWO and a couple were asked NONE and told "enjoy your trip."
It is not really the amount of questions that bothers me about this process, but rather the haphazard-method in which the questions were asked...
they were so random; no answers were recorded and wait until you hear them....You will scratch your head too!

Actual questions asked in the visa "interview":
1. Why are you traveling to the US? (totally expected this one!)
2. Did you decide to apply for this study trip or did someone make the decision for you? (again, expected!)
3. Have you ever been in the US before? (great one...)
4. What are your plans after graduation from high school? (odd, but hey maybe they want to know if the student is planning to come back to the US...)

and then came these:
5. Do you play any sports? (Yes). Really, what do you play?
6. What is your favorite subject in school?
7. Is this your real name? (yes, a student from Sri Lanka was asked this as the employee held his PASSPORT in his hand, looking at his name!)
8. Do you have any brothers or sisters in the US?

And my favorite of all the questions....
9. Cool shirt. What does that thing on the front mean?

All in all, it was a good day. My kids were all on time at 6am to get on the bus.
They were well-behaved and fun.
The bus driver was nice.
I got to see Storebælt's bridge twice (one of my fave things in DK).
and all 30 were approved for their visas.

I just have to say that the American Embassy in Denmark needs to hire an interior decorator to come in and overhaul that place. It is the kind of building in the US that we often condemn and rebuild. I assured my students that the REAL America looks WAY MORE awesome than the representative building at Dag Hammarskjolds Alle in Copenhagen!

Maybe I should 'offer' my consulting services to the Embassy. I can overhaul a process like nobody's business...and hubs would love it if I was actually using my MPA!

You should write a letter about our experience and the disheveled look to someone. I am unsure who..Ambassador perhaps. Totally disappointing to hear it is not well kept. How are people to look at America positively when that is the first thing they are exposed to by our government. I can't wait to see that bridge!
nbg

It's good to know that at that hour, you were able to get all the kids there on time! The process is about what I would've expected and the questions, well... maybe they were trying to trick the kids into saying something by asking inane questions.

You all seem to be assuming that the unwelcoming, unhelpful attitude is a bug. I suspect it's a feature. The State Department isn't trying to encourage people to come to the US. It works on the assumption that everyone in the world really wants to be an American anyway, and its job is to discourage them.

It may even work. I know that after my last visit to the US embassy in London (and I had to leave Glasgow bloody early in the morning to get there) I vowed to move back to Europe at the earliest opportunity.

Ya... sounds like the American Embassy in Oslo... You would expect they would be a little more friendly (at least to Americans...) Might help if you even got a couple of Americans to work there! :-)

What an experience - in so many ways!