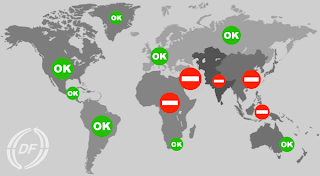 (image borrowed from Expat in Denmark)


This map represents the latest proposal of Dansk Folkeparti; the "OK" stamp is given to those countries that DF says it is ok to immigrate to Denmark FROM.... the "Do Not Enter" stamp is given to those places that DF wants to BLOCK from entry to Denmark. In a nutshell-- this map says that those from non-Western countries should not be allowed to immigrate to Denmark.

Peter Skaarup, the immigration spokesman for DF (OMG, they have an IMMIGRATION SPOKESMAN??!!) said that this proposal is necessary to the survival of the welfare state in Denmark because (to paraphrase him), "the immigrants from non-Western countries are a drain on society because they do not pay taxes; they only receive social benefits."

Is he serious? So the doctor I personally know from India, who is working at one of the larger hospitals in DK, is a DRAIN on the society?????? And she is NOT contributing to the society? Again, is he serious?

So many expats that I know work really hard to dispel the "myths" that DK is a xenophobic country.... we tell stories to our friends and family about ways we are accepted (although it is in a different way than in our home countries) and we tell stories about the GOOD that we are finding in DK in our everyday lives.  Then people like the IMMIGRATION SPOKESMAN for DK opens his mouth and basically UNDOES every good thing we have told. In a matter of one speech filled with hatred and racism, he mars the good images that we have worked so hard to create.

This blog post is not to gripe about the DF. God, if that was the purpose of the blog, I would never stop typing... LOL

This blog post is to REITERATE the following that I have said all along:

Just when you though they couldn't get any worse, huh? Unfortunately it's not enough to just stay away from DF when you cast your vote. A vote for for Venstre, Konservative and Liberal Alliance is pretty much the same thing as a vote for DF since they are all dependent on each other to stay in power. I have, thank God, never voted for any of the above.

It can't get worse than this. Right?

I know you won't publish this comment, but I just want you to know:

OF COURSE it is because you are from the west, from the United States of America. And because you are white. I know black American girls who encounter racism here in Denmark too because obviously people are too dumb to know that not all blacks are from Somalia

I have encountered many racism acts in Denmark because of my yellow skin - they automatically thinks Asian women are stupid and only work as cleaners.

I have also a friend, engineer from Kenya and he's also treated badly by people on the street in Denmark because...*drum rolls* he's black.

If not all Danes don't agree with DF, are not racists, how come they didn't stand up against DF? How come nobody throw a protest?

Have you also read the latest proposal a party called Liberal Alliance? They want to cut free healthcare access to immigrants under 7 year stay in Denmark, because they think we're burden to the society.

How do you explain that? They're not DF and guess what? Venstre calls that proposal "interesting" and willing to discuss further about it.

It's just a matter of time before they close the border entirely and we'll (the non western kind) all be out of here when that happens and watch Denmark collapses - for who do they think they are that they could target special group of immigrants without offend the others when the rules they draft affect ALL immigrants?

It is sad to think that the spokesman decided to lump all immigrants into the drain on society category. I sympathize with the Danes especially after living in Arizona last year.

I do, however, think that the Danes as well as any other countries do have the right to say if you are going to live in our country, you must learn to speak the native tongue and follow certain laws/rules in order to take the benefits from said country.

It's not just the spokesman, it's all the people voting for DF: all so very scared of change and what's different, that they silently agree to what DF postulates.
I know it's a sad human factor to fear the unknown, which also means the strangeness and colours of other cultures, instead of beeing curious....but letting DF fuel this fear by accepting their rascist rhetorics is dangerous!
Beeing overhere I get goosebumps when I read or hear what the Danish politicians allow themselves to say....which words they use - and it's all degrading the discussions and our thoughts on "non-western"-immigrants.
Please, please would somebody stand up and give them proper answer.
......and when you ask around you in DK, you'll find nobody voting for DF....nobody admits they agree with them.....I guess they all know in their mind, it's wrong to agree, but when it gets to putting your mark on the voting ballot it's all about FEELINGS and beeing afraid......
Will somebody please tell all these afraid people, in an overwhelming fatherly/motherly voice, that there's nothing to be afraid of.....that everything is going to be allright, in a manner that will convince them to move their vote far far away from DF?!

My biggest fear is that it will indeed get far worse before it gets better. All that we can hope for is to continue to enlighten the average dane as to what is going on with immigration proposals. I know many of those I meet on a daily basis have no idea that I have to reapply for residency every few years, etc.

I so wish that DF would just shut up! They're an embarassement and they're given the wrong picture of Denmark. The people who know me, will know that I often speak ill of Denmark, because some things in this country frankly piss me of. But it is however my home country and it hurts me when people describe Denmark as a racist country because the majority of Danes are not that way. Most Danes welcome foreigners as long as they integrate into society; and by this I don't mean turn Danish, but follow Danish laws and respect the system and the culture. Most Danes think that foreigners bring a great and wonderful diversity to Denmark. Unfortunately, these are not the Danes who are heard around the world. I wish they were

Such a sad state of affairs. I hope the Danes get out there and really make their votes count so parties like this one can't get into power!

Jennie is right, while many will say they are ashamed of the DFP, they will then go onto vote for parties who allow the DFP to have power.

The problem is it's all about Islam with the DF. They know that Danes are sensitive about the idea of people doing Islam having equal rights here. DF want to outlaw certain nationalities in an effort to show they intend to keep the practice of Islam out of Denmark. Because someone doing Islam isn't a great match for the Danish way of doing things. Denmark is for the easily assimilated.

It's all a bit of a joke though, considering the number of people doing Islam in the US for example (and who would say an American Muslim wouldn't want to move to Denmark?) how do the DF plan to get around the fact that Islam is not about where a person comes from, it's about what someone does? Unless it really is about 'brown faces' (quote: a dane).

There is this extreme view that the Danish culture has to remain supreme in Denmark, and this is drummed into children here from being babies, and I believe this is the root of the problem. When multiculturalism is celebrated in the early years curriculum then Denmark will improve. Only then. As it is, vuggestue and børnehaven seem to be about training children to be Danish, and it's ryebread and the danish flags all the way. This, I feel, is the root of the problem. DFP are awful and extreme but they are only a product of the society we live in.

Most 'immigrants' who came here on refugee status I have met have been more integrated than Danes since the system forces them to walk carefully along the line, and Danes have slightly more freedom to explore options. So it's utterly unfair that immigrants get such bad press. They are generally doing their utmost, it's time they were recognized for the sacrifices they have made in order to be here at all.

Quote: "Then people like the IMMIGRATION SPOKESMAN for DK opens his mouth..."


He's not the immigration spokesman for DK (Denmark), but only for his political party DF (Dansk Folkeparti).

But I can understand how/why this is happening...being married to a Dane has shown me that they do not adapt well to change. Change scares them. We Americans don't understand that mentality because we are from a society that is a melting pot of people and cultures. For eons Denmark has been a homogeneous society of blond hair blue eyed people. They are just using the welfare system as an excuse

Instead of barring all immigrants from non-Western nations, perhaps they should have a quota like they do here in the US. Give out X number of Visas per country, and when those visas are filled, they have to wait until the next year. That way you have control over who enters the country and for what reasons.

Tak, Pete! It was a typo, but thanks for catching it!

I think it's also important to see why people vote for the different parties. It is easy to say that everyone who votes for DF do it because of their immigration politics, but I know many elderly vote for them because they are a party whose elder-policy is one of the more reasonable.

I've also heard a vast number of young dog lovers vote for DF because of their animal welfare politics, and really don't pay much attention to their immigration politics, because it doesn't affect them.

Others vote DF, even if they don't support the party policies as such, but to even out the score, because they find the socialist parties too far out the other end.

The problem with people are that they tend to think "What can a political party do for ME? How does the vote I cast affect ME directly?" and only vote in relation to the issues that affect them directly, and DF knows how to take advantage of that. They are pampering to the masses and the lowest common denominator - and they do it well.

Hi Kelli
I want to disagree a little bit with you. Or maybe not disagree but comment on what you have written. At first I want to make it clear that I do not sympathize with DF. My point is just that we cant let everybody in. We just can't afford it here in DK! But if people want to come to DK and contribute to our society they are so very welcome.
And I don't think that DF hate foreigners - they just love DK (;. Okay joking apart.

My point is: "I do not agree with what you have to say, but I'll defend to the death your right to say it"