Have you ever taken the time to read the "Unversal Declaration of Human Rights (UDHR)"?
There is an entire website dedicated to them HERE, but I have attached copies of the 30 articles of the document here if you are interested.
I have spent a great deal of time reading and researching these, not only out of personal interest, but in connection to my teaching. Because one of my classes is in the Samfundsfag (social sciences) line, I try to plan as many English lessons as possible with connection to a SS theme....hence the Human Rights research. 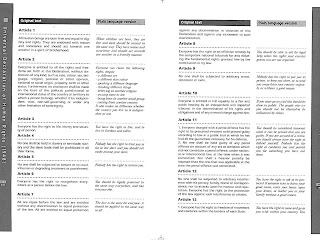 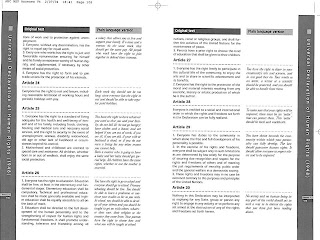 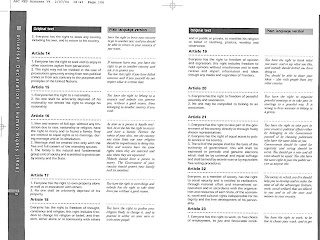 Today my students in 3R are not in class....they are doing Field Work (feltarbejde as we call it in Danish). Their field work is ultimately going to connect to their study of the Grapes of Wrath and the treatment of migrant farmers (particularly the Okies) in the US in the 1930s, but initially their field work is connected to these 30 articles in a project called the "Face(s) of Humanity". 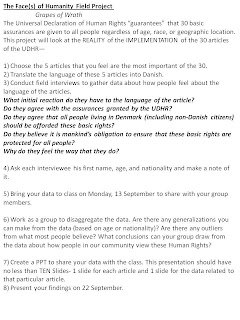 I wanted to share the project because as I sit here, (knowing they are out conducting research as I type...) I am really excited to find out what data they "uncover". I asked them to choose the 5 articles that they themselves feel are most important; however several groups chose the ones that they felt might be the most controversial as they ask people in the community about them....the ones that would elicit a REACTION. (I was actually quite proud of their plan!) We complain a lot about the hatred of others spewed from the mouths of those in the Dansk Folkeparti, but this is the students' chance to see how the "common man" in the Herning community feels about the assurances granted in the UDHR.

My fear is that they will find out that some of the same attitudes of people in California in 1930 are still alive in Denmark (as they are in other places in the world) 2010. I hope not.....  I hope the data tell a different story.
at 2:36 AM

I was thinking about you yesterday. My daughter has yet another uninspired English teacher this year. He is very aggressive in correcting students who address him as Mister instead of Doctor. I actually wondered what it would cost me to send Lydia to you for one year of English. I suspect that after that year with you, she would be a mature student and might actually discover how fun it is to think.

I've got about $100 saved. Think that would be enough?

Unfortunately my friend, we have become a society all to aware of injustices and yet we do nothing..while your students might become more aware of how things are around them, it's doubtful they will do anything about it- unfortunately. That could be the pessimist in me speaking and I'd love to be wrong...but....uff..wait a second, I'm suppose to be a positive girl...ok, let's see...I hope your students can be the beginning of new thinking that will bring great changes in the future!!
P.s. opened my blog back up...feels good to be back..missed everyone..
Have a great weekend-
Hugs from me

Can't wait to see what conclusions your students draw.

I love hearing about what you are doing in your English classes. I'm continually amazed at the high level of thinking and analysis your kids do. It is so inspiring. I was showing a power point in my art class the other day on symbolism with line in art - how curvy lines elicit a different emotional response than say a straight line. Several of the kids in class literally told me they thought it was all a bunch of bull s*** that symbolism and such was a crock. I was so taken aback and so disappointed I didn't even know how to respond.

CF- you are too sweet! I would love to teach your daughter! And the fact that she does not have someone in love with teaching is unacceptable...but I know that is a reality.

And although I never mention this, one thing to remember about my classes is that English is either their 2nd or 3rd language... so they are completely bilingual or trilingual at the level of analysis that they do with me...I am continuously amazed by them!

And Nettie...that breaks my heart.