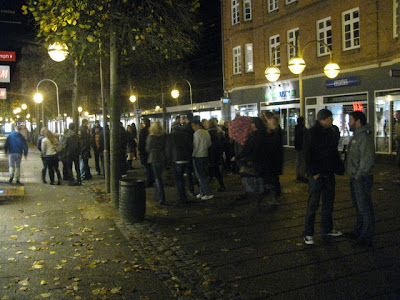 90+ members of the Herning/Ikast-Brande International Society converged on downtown Herning last night, and of those 90+ attendees, about 90% of them were foreigners (AKA "non-Danes").

I could write about how many different nationalities we had represented last night (at least 26!); I could also write about the various reasons that these foreigners have all found themselves living around Herning, Denmark (working @ companies like Siemens or Vestas, studying at the Århus University campus in Herning, or like me, married to a Dane!); and I could also write about how much fun it was to watch all these nationalities interact with each other as we "crawled" from pub to pub throughout downtown Herning. But I want to write about something else.... something that I found to be a PLEASANT SURPRISE last night.....something that I think is THERE, we just have to look a little harder for it sometimes... and that is how the DANES (the non-members of our group...you know, just the regular Danish people out for their own fun time last night) reacted to us.

It was quite a sight to see as 90+ people made their way from pub to pub down the "gågade" (walking streets) in Herning, and as 90+ people all entered the same pub at the same time, I am sure that sight was REALLY interesting to see from "the outside", so of course, people stopped (some stared) and wondered what was going on! But I have to give the Danes credit because EVERY interaction I had with the "normal Danish community" last night was 100% positive as I (or people I was with) explained to them (usually in English) what the heck we were doing. I heard things like:

"Wow, I had no idea Herning had something for the foreigners here. That is amazing."
"Why didn't someone start something like this sooner? Looks like it is a great thing!"
"This came from a project at the Erhvervsrådet (Chamber of Commerce)? I had no idea they were doing things like this! Neat!"
"And you don't know each other before you meet at one of these events? What a cool thing to do; meeting all those new people like that."
"What are you guys doing next?!"
"And can Danes become a part of this?!"

We assume Danes don't like foreigners. We assume Danes don't want foreigners here. But that assumption is something the media teaches us. (Ok, there are some who feel this way, I know. But we cannot ASSUME that the entire country does just because a few outspoken buttheads are the ones grabbing the microphones the most often!!!!)

The Danes we interacted with last night, all throughout Herning, welcomed us. They liked seeing us come out of our homes and comfort zones and mix it up with people who, truthfully, are quite different from ourselves. So I think we accomplished 2 things last night--- well, actually 3--that were not even our purpose for the event:

Accomplishment #1) I (and we) discovered that the Danes DO accept us as part of their community!

Accomplishment #2) We showed the city of Herning that foreigners are actually not that different than they are. We, too, put on our pants one leg at a time, and we, too, like to let our hair down and have a good time with friends... and drink Carlsberg!

Accomplishment #3) The Danes were able to see that "mixing it up" with people who are so different from oneself can be a FUN and rewarding thing.... and now maybe some of them will try it in their own lives in the future. If that happens, we will have accomplished more than we could have ever hoped!
at 8:59 AM

Who knew that you could accomplish so much with a huge pub crawl? Way to go!

That's amazing! I, myself, had a great night at kulturnatten with a friend and hubby. It's so much fun to discover Denmark and Danes through drinking ;)

WOW - this looks like a great turnout and lots of fun. Did you have anything to do with the formation of the International Society? Great idea and great plan.

I'm sure it was a great evening, sounds fun with so many different cultures represented and what a wonderful statement that everyone could have a great time TOGETHER..how could the Danes not appreciate that? Open their minds, one at a time my friend!!!

Mom--
This is the board that Mads and I are on... in fact, I am one of the co-chairmen..Remember this blog?
http://madsandkelli.blogspot.com/2010/02/international-society.html

So the only way to get accepted by Danes is to get drunk? What if you don't drink, you don't do sports, you don't have blonde hair and you speak with an accent? I can guarantee that they'll not know how to deal with you and so avoid or openly harass you for being different.

Dear "HI"
Normally I choose not to publish negative comments such as this one; comments from negative expats that are exactly what I am trying to COMBAT as a foreigner in DK.
However, I need to ask you.. can't you read? You obviously cannot or choose to only read what you WANT to SEE...
If you had read, you'd see that we had 26 nationalities that night (and have 50+ in our overall group) and those 26 nationalities did not all have BLONDE HAIR and they ALL spoke with an accent. And to answer your next question, NO, they did not all come from the WEST. We have people from China, Korea, Iran, Israel, Kenya, and Saudi Arabia...just to name a few!

Sounds like you have a chip on your shoulder and that until it is removed, you will never find the good in Danish society or in Danes, themselves.

I was happy and cheerful when I came here, and I saw only the good in the country and people - would not have come otherwise. Slowly over the past nine years as I watched others being marginalized and bullied, and as I experienced it myself, that happiness and cheerfulness was worn away until I stopped trying and now rarely leave my house. There is only so much rudeness, ignorance and hatred that a person can take. I now choose not to expose myself to any of it and will be moving back home where I know for certain that there is an atmosphere of love and caring and acceptance.

I am so glad to hear you had a great night. And so sorry we missed it :-(
And I'm glad that you got to meet Danes that appreciate foreigners. We ARE out there - we just don't shout as loud as PK and her buddies

And "hi"
Being a Dane, I can guarenteen YOU that not all Danes would react the way you describe - but if you always presume that that is what's gonna happen, that is most likely what you're gonna get. Negativity breads negativity

You accused HI for not being able to read or blind. Can't you see that it is yourself who is blind?

You only SEE the good side of DK, deluding yourself into believing that everyone is AWESOME. Of course you being white foreigner could only experience awesome thing. What about the others?

Your previous post about Denmark for Dummies made me laugh - you posing as an expert expat when you are flying in and out Denmark every single chance you can, get your packages (peanut butter or whatever weird things American eat that are not sold in Denmark) sent.

You obviously are not qualified to tell the tale of a foreigner in Denmark. What about the unlucky ones who can't afford to fly home five times a year? Those who are forced to work as cleaner, because otherwise they couldn't survive in Denmark? You dismiss all those and label them negative.

You have no idea about other people's sufferings when you're sitting in a soft cushion yet you dare to point your finger unto others and call them names.a

Wow, I'm all for a bit of positive spin, but this little piece is positively dripping with it.

How desperate are you to fit in?

We all know 90+ foreigners could not possibly have had a good time! All of them must be delusional! It's not possible! It's not what it was 20 years ago! How dare you go out for an evening and enjoy yourselves!

You're obviously a newbie at the Danish game, and possibly living in a closet, and haven't been exposed to the bright light of day that is everday for people who come here to work, and are told they have to go back to square one, start again, foreign qualifications not up to the same teriffic standard as the Danish ones...etc, and besides, 90 people on a bender (or whatever) is auto suggestion, anyone contravening the 'you're going to enjoy yourselves' rule on a night out, risks being ostracised, and Danes feel really comfortable if there's a bunch of imbibing people to communicate with, it really is a lot different making contact with Danes in the daylight. And don't be a coward and not post this, you're bubble will burst someday too!

Kelli, that sounds like so much fun. I'm glad you all had a great evening.


P.S. To all the haters: Have you ever been happy anywhere? It sounds like you thrieve in misery and no matter where you live you would complain and be unhappy. It must be exhausting...

The Chamber is doing a good thing in starting an international society and I think it is great that you are one of the leaders. I remember you mentioning this project earlier. Thank you for standing down to the angry comments. So far I have ignored them on my blog - not because someone had another point of view (which is fine) but because of the anger that comes across with some of the comments.

You go girl! Kelli you rock.. & your fabulous attitude about everything is a delight. Nothing wrong with being HAPPY.
I just wonder what it must be like to live with these NEGATIVE people.. can you imagine having to come home to THAT everyday.. ugh.