Sometimes it is fun to "watch myself" through Mads' eyes because I realize from what he says and how he looks at me, that I am really a little kid about certain things. ESPECIALLY since I moved to DK and I "come back" to certain things in the US each time we visit. I am like a little kid on Christmas morning!

We had LOTS of examples of those things yesterday on our first full day in Seattle.

1. It all began with the Hilton's breakfast buffet-- which included BISCUITS AND GRAVY! There was no ham or cheese or slimy boiled eggs on the counter....just good ol' American breakfast foods! Mads said my eyes were twinkling as I ate my biscuits smothered in cream gravy (I think it was because it was the kind with the little bits of sausage in it!!)

2. Within a 3 block radius around Pikes Market, there are 4 Starbucks, including the ORIGINAL Starbucks from 1971. He said it was quite funny to watch me order that first (and for sure, not last) Pumpkin Spice Latte from the barista. You would have thought I was ordering jewelry from Tiffany's. 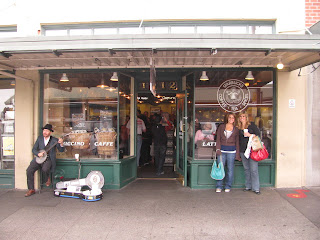 3. Along the mezzanine in Pikes Market there are TWO Used bookstores. And yes, we went into both. I was QUITE HAPPY to learn that Jess' boyfriend, Matt (who is here with us) is a book lover!! He and I bought quite a few used books and could have spent HOURS in the 2 stores, much to the dismay of our traveling companions. I held onto those bags of books like they were hidden treasure! 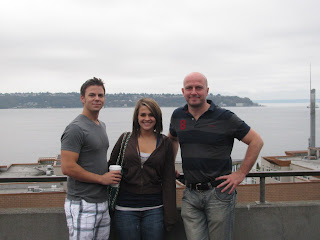 4. Last night's dinner was at PF Changs, hands-down the best Chinese food in the US. I won't eat Chinese food in DK because it does not taste AT ALL like "real" Chinese food (you know, the kind you get in America! LOL) so last night was like heaven on earth! Even Mathias, my colleague who is with us, agreed IT ROCKED. Mads got quite a kick out of imitating my mannerisms as my chopsticks were flying around picking out one delicious thing after another to sample! (However we had to stop at a pharmacy so Mathias could buy some antacids...this is his first trip to the US and he was a bit worried that ALLLLLL that yummy food might not affect him in a good way!) 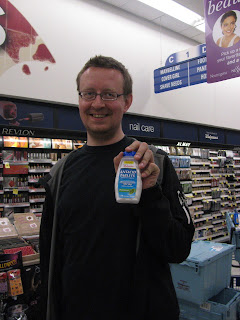 And of course all of these silly things mean so much more because I am sharing them with the 2 most important people in my life. And I cannot wait to see what today holds! 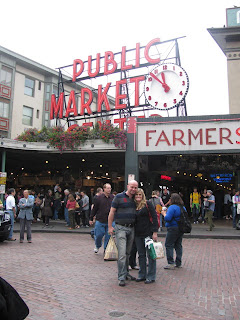 Being like a little kid is definitely the way to go :) Why stop squeezing out all the enjoyment you can from the things you like?
Enjoy Seattle!

Oh, how wonderful for you. Enjoy every precious moment.

You're making me nostalgic for the good ole USA!

Kelli,
Back in the States so soon. You are a true Dane now, traveling every few months. Have I missed something? Isn't there school going on right now in DK?
I can tell you I have never tried biscuits and gravy as they don't look like breakfast food to me. i must also be a true Dane. Give me rundstykker and ost, anytime instead.
You have to go to peets coffee. it's so much better than Starbucks. My opinion.