or på engelsk:
Love without borders! 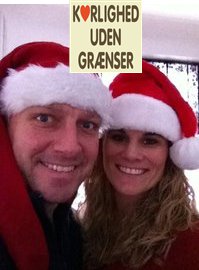 Family Reunification is how I was allowed to come to Denmark. We were married in November 2007 and applied the following weeks for permission for me to move to Denmark in order to "reunify" our family. We had to submit a 27page application that included details such as the SIZE of the house that Mads had rented for us because he had to prove that it would accommodate 3 people (because at that point Jess was planning to move with me). He also had to put up a bank guarantee of 55000kroner to show that he had the means to support me should I not be able to get a job (because under F.R., I was not eligible for any financial assistance from the state). Jess and I were approved to move to Denmark within 3 weeks of submitting our application, so although the F.R. application was tedious and a bit laborious, we never felt like the things they were asking from or about us were inappropriate.

Yesterday more than 6000 people converged on the 3 biggest cities in Denmark-- Copenhagen, Århus, and Odense --to protest the new Danish Immigration Laws related to "Family Reunification". The event was organized, of all places, on FACEBOOK by a group called "Ægteskab uden grænser" (Marriage without borders) in order to tell the Danish government that Danes are unhappy with the new POINTS system that has been established to determine if the foreigner they have chosen to fall in love with and marry is WORTHY to come and live in Denmark. 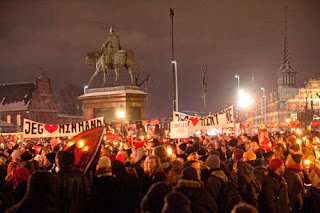 The points were created under the guise of preventing arranged marriages and as an answer to the old 24-year old age requirement, but really what has been created through the points is an old-fashioned sorting system.

If you have ever read George Orwell's Animal Farm, you can see how this system REEKS of the same type of thinking that was encouraged amongst the animals, but instead of "FOUR LEGS, GOOD; TWO LEGS, BAD", we are now saying "EDUCATED, EXPERIENCED & WESTERN, GOOD; UNEDUCATED, UNEXPERIENCED & EASTERN; BAD". In Orwell's Animal Farm it was the sheep who chanted these things on a regular basis, but I think it is quite evident from yesterday's gathering that many residents of Denmark are NOT going to allow themselves to just be sheep.......

I have a feeling this is not the last we will hear from this group.
Read more HERE about how to get involved!  (Sorry it's only in Danish....maybe I should offer to translate it for them????)

So very sorry and appalled to hear this turn in events...