My how I have changed...
I am not sure if I am growing up or mellowing out, but either way, the change is good.

I used to be such a wimp about cold weather. Well, actually I am still somewhat of a wimp, but since moving to Denmark, I have definitely changed how I see the outdoors; especially those 8 months of the year when the "Danish outdoors" are just a tad bit cold.

I am not sure if it is the nature that I am surrounded by in Herning; but then again, there was nature in Texas. However I would NEVER have taken a walk in the forest (or field or basically any outdoor location) in sub-zero temps and snow (IF we actually had it) when I lived in Texas! Maybe it is because most of the people I was surrounded by were just like me..... NOT TOO KEEN on going outdoors when it is bone-chilling cold outside.

But I just came in from walking Albert this morning; yes, there is still at least a half-foot of snow on the ground and more pouring from the sky as we walked. But as we turned each corner of our walk, I noticed something that used to shock the heck out of me.....THERE WERE PEOPLE EVERYWHERE. Some walking to the bakery; others walking their dogs; but most were walking TOWARD downtown to go shopping.......  My first winter here it just amazed me every time I saw all the locals out in this kind of weather! Last year in the "BLIZZARD OF 09/10" I assumed the "going outdoors" would slow down tremendously since we were covered in the white stuff for more than 2 solid months.... but nope, they were all still out there. In fact I took this pic this morning of one of my favorite sites in DK on these snowy days.... 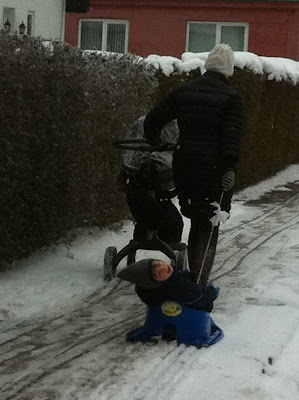 But today, I noticed that my shock (and some of my winter discomfort) has disappeared! I had my head up, letting the snowflakes hit my eyelashes, and was smiling and saying "GOD MORGEN" to everyone we passed! (And after 2 1/2 years of living in Herning, I am happy to report that they were also looking up, smiling and saying "God morgen" back to me!)  I think the cold crisp air ENERGIZES us in a way. It does something to you....... and makes it actually NICE to be out in it.

I began this post with a wondering of whether my attitude today is due to my growing up or my mellowing out.... but I definitely think it's the latter, and that is a pretty great feeling!
Happy Snowy Saturday!
at 5:08 AM

There is something invigorating about snow, isn't there? I love it!

I have to admit that I never thought you'd reach this stage, and certainly not this quickly.

But yeah, if you had to wait for a warm, dry, non-windy day to go outside in Denmark, you would probably be stuck indoors for some 340 days a year. :)

And yes, walks in the show are lovely, fun and refreshing, not to mention how nice it is to cuddle up on the couch with a book and a mug of hot chocolate after such a walk.

I think you're spot on about the snow. It reminds us that even though we have lots of comforts in our daily life, we're just a small part of a great nature! It is somehow refreshing to be 'told' that we're just not that great ourself;-)

I can't figure the picture out. Is that a little kid's head peeking out from some contraption?

I live in "sunny" California and I go through the same process even though the temps are different. Cold is cold and warm is warm regardless of the temperatures.

Nina,
It's a plastic sled. These pop up all over DK when the snows come... I see them a LOT when I go to work....moms and dads are pulling the little people on the sleds to the børnehave! :-)