Last year I noticed how AWESOME it is to have a birthday "on Facebook"! You get so many wishes from so many different people, so that when you wake up on the big day, it is like opening your old-fashioned mailbox and finding a huge stack of birthday cards!

This year, however, I noticed something a bit different.
Yes, I still had GOBS of wishes, but I was shocked at how INTERNATIONAL my birthday wall was!
I am not a statistician, but I thought these stats were pretty cool to collect! 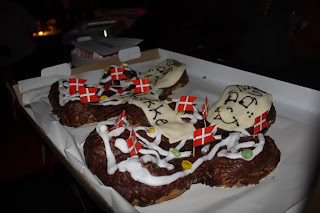 I received ONE HUNDRED & EIGHTY ONE BIRTHDAY GREETINGS on Facebook!

and the rest were from all over the United States and Denmark...

That's a LOT of territory to be covered just to celebrate one young lady turning 41!

Hurray for diversity and international birthdays!

I think the birthday greetings on fb are one of the highlights of having fb!! Always fun to have your email bombarded with happy birthday wishes (even from people who get the age wrong..eh hem....)
The cake looks good, was it? Hope you had a fun day and I'm SURE you did thanks to your wonderful VIKING! Happy Friday also my friend!!

I thought you were older. Are you sure you're only 41?

Hmm Charming Guy.
Not sure if you are really that charming, after all.
:-)