I try to understand "all things Danish"....at least as much as possible, but after living here almost three years, I still have no concept how things can change in the Danish government.  And I have a feeling that even after living here a decade or more, I still won't fully get it...

I went to work yesterday, knowing that (according to the rumors) this umm....lovely lady was going to be fired from her position as Integrations Minister of Denmark. 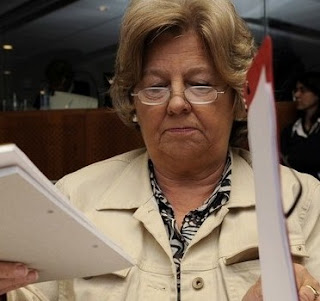 Yes, she did some things she should not have done, things worthy of losing her job, but I have to ask....can you imagine ANY WORSE JOB ON THE PLANET than being the Integrations Minister of Denmark??  She is the 4th or 5th in a row to be fired from this position...

Ok, I digress.
Anyway, I went to work, figuring that by 5pm, we'd have a new member of Folketinget (Danish parliament); however by the time I got home from work, they had conducted what we in Texas refer to as a FRUIT BASKET TURNOVER!
Folks were fired, others "resigned for personal reasons" (yeah, whatever TN!), and all of a sudden we had all kinds of new faces in the Folketinget!

So maybe my quandary is not with learning HOW to understand the inner workings of the Danish government, but rather, HOW ON EARTH we can DUPLICATE this practice in the US? Wouldn't that be great to go to work one morning, knowing that by the time your work day ended, Barack would have done his own fruit basket turnover on Capitol Hill because people WERE NOT DOING THE JOB THEY WERE ELECTED TO DO?

The US government, supposedly the model for all things good, is so broken. It depresses me how very far we are from it ever being fixed.

Heads of Danish ministries are just like Cabinet members in the US - they are both appointed by the PM/President and serve at his pleasure and get tossed out when they screw up. Thankfully most of the time the Cabinet in the US doesn't break UN conventions (yeah, I'm looking at *you* Roberto "Waterboarding is OK" Alvarez!)!

But if the President or PM could kick out people who were ELECTED by the voters... you'd have Dictatorship on your hands. Imagine what would have happened if Dubya could have thrown every elected official who opposed him out of Congress! By golly he could have rewritten the Constitution!! Horrors! Thankfully, no President or Prime Minister has that power, they only have the power to change the posts that they are allowed to appoint - Cabinet in the US, top Ministry posts in DK.

C commented on this today while we were on the phone. I told him I hope maybe it will help make things easier when I get there :) Should I hope?

It's a nice tool, but in this case it is last minute panic. Like peeing in your pants to try and keep warm. The election is just around the corner, and the current government has not made a good impression, especially not since Løkke took over. ;)

Only one problem - the new guy is gonna do an even worse job.....

Erin, you are exactly right.. I was thinking about the cabinet and how over the years, there have been folks who should have been sent home and never invited back....but nope, we just kept overlooking both bad behavior and incompetency.....

I do love May Lin's analogy... just like peeing your pants... lol.