"Ehvervsrådet--kender folk du bør kende"....
"Chamber of Commerce-- knowing the folks you ought to know"

Note: The Erhvervsrådet is the sponsoring organization for 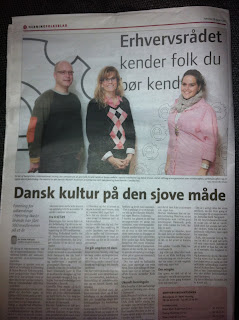 the International Society in Herning/Ikast-Brande


This article was in Thursday's Herning newspaper! And here is a translated version of what it says, just for my mom!

Danish Culture in a fun way

65 nationalities are represented when everyone gets together in International Society--which as the name denotes is of international size. The group began as a part of a project from the Herning/Ikast-Brande Chamber of Commerce where project leader Anja Voller has, during the last 2 years, worked to ensure the best integration experience possible for new residents in the area.


The initial projections of the project have doubled in side as the goal was to work to help newcomers solve practical problems while at the same time providing them with some social interaction. The focus has shifted more toward permanent initiatives which provide regular social arrangements for those who are here working at one of the international companies so they can learn more about the informal side of Danish life while they are creating contacts with others who are in their same situations.


From 0 to 529
The group has recently celebrated its first birthday and what a cause for celebration it was as the membership went from 0 to 529 in just one year. Herning Folkeblad met three of the advisory board members at the Chamber of Commerce offices which is where the board meets together.

One of the founders and current chairman is American Kelli Nørgaard who has lived in Denmark almost three years, is married to a Dane, and teaches English at Gymnasium in Herning. Camila Dias, from Brazil, has lived in Denmark for eight years. She is a multi-media designer who studied product design. Today she works as a webdesigner at Bestseller in Brande.


Camila Dias ran into Kelli Nørgaard because she googled the words "internationals in Herning" and found Kelli through her blog that she has written over the last 3 years about her life in Denmark.

Morten Andersen is 100% Danish, but also very international.  He owns his own Project Management company and has many international contacts."I had just about no Danish contacts when I moved to Herning, and I discovered it is easer to create contacts with those who are in the same boat as you are," he said. Even for a Dane it can be difficult to enter into a local community. That is why he joined the group, which has about 80 other Danes as members and not all are married to foreigners. They just thought it would be interesting to join and expand their network.


International Society has quite a long list of arrangements this past year all with the goal of making it easier for new residents to enter into Danish society. This has been accomplished through different events such as Skt. Hans Aften, Mortensaften, Julefrokost and even a presentation of a typical Danish birthday.

All the events are spiced up with an international flavor and the International Society's first birthday party is a great example of this as they had not only a Danish birthday cake, but birthday cakes from eight different countries to share.


Food is used to build lots of bridges which is proven at the group's most popular event- Cook & Talk where several different nationalities meet in the kitchen of a local school and prepare food together. "It is incredible to see a Nepalese man standing there and making Danish frikadeller," says Morten Andersen.


In the beginning the plan was to offer monthly activities, but now the demand is so high for social interaction that the Advisory board is trying to offer events every two weeks to the members. Kelli Nørgaard described the huge interest in the social events that they are planning by noting that for something like Mortensaften, a traditional Danish holiday on a Wednesday night in November, 65 people showed up just to eat duck and potatoes together. This shows they want to be there.


"We even had a Dutch woman who had recently moved back home from Denmark, but when she heard about our upcoming Pub Crawl, she flew back just for the night!"


The Unknown Business Life
But why is necessary to have a group like this in Denmark? Kelli Nørgaard stated that this kind of group may not be as needed in a place like the US, a place that was created on the idea of immigration. But Camila Dias could imagine something like this being created in Brazil. "A lot is dependent how the fact that for a large part of our year here in Denmark, people are not coming outdoors so much of the time." Morten Andersen has another explanation. He believes that business life currently emphasizes to a high degree that in Denmark we are a bit closed off to those that are not "part of us"; we see in many clubs that you must have proof of a membership (or something in common) to participate, but that is not the case with International Society.  Camila Dias nodded her agreement because she has said that it is difficult to join other clubs in the area because you are worried about the language barriers that exist.


The group always provides a time during each event to just mingle with one another because we have found that every single time we have new people joining us for the first time. We see it as a good thing that each time we come together we have new faces.


The three board members are in agreement that it quite worthwhile to provide this social network in the area, not only for the internationals who are living here, but for the area itself. When you feel like you are connected to the community and have a network that functions well, you are more likely to buy a house and settle down here.


If you come out into the city this Friday night, you just might be amazed to find a group of foreigners, in costume, at Kulturellen, celebrating Fastelavn. It's not just the kids who will dress up for this holiday!

Great review! Wish we had something similar where I am... Hope you all had fun at Fastelavn.

One thought and one comment. First I do not agree that we do not need this in America. Yes, we have alot of immigration but we do not have much inter-gration. Second, while I was reading your blog I flashed on the Self Esteem training I used to do. I remember that #1 was "A Sense of Belonging". One can have that in their natural environment and then lose it if they move. We must always have a "Sense of Belonging" whereever we are. I thing your efforts and group are a seed that must grow over the globe.

what do you mean we don't have "inter-gration" in the states?