Know who these guys are? 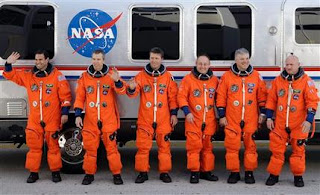 They are the astronauts scheduled to go up in this: 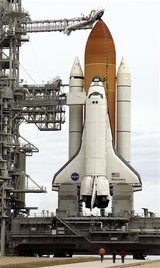 on April 19th.... you know, the day that Mads and my niece and nephew are driving to Cape Canaveral to watch it?? As personal guests of Jon McBride, ASTRONAUT??

Note: When I was growing up, the US was still in somewhat of a "red scare" mentality so I learned to think that "all things Russian" were bad.... however as I became an open-minded, wise adult, I began to think for myself and realized that not ALL things Russian were really so bad. That is, until a few days ago. Here I was, living life, thinking that as an American I had nothing to FEAR from the Russians..... UNTIL THE DAY THE EMAIL CAME.

The email that had a link to THIS news story: 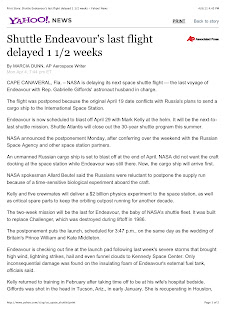 The email that broke my husband's heart.....
The email that renewed my thought that RUSSIA IS BAD! :-) You see, the reason that the Shuttle Endeavor's launch has to be delayed is because the Russians have decided to make a delivery to the International Space Station at that same time so you cannot have two shuttles heading to the same place in outer space at once (although outer space is a really big place.....)

So Jon McBride, ASTRONAUT, told Mads that he could use the tickets to come 10 days later..... except 10 days later, Mads' trip to Cape Canaveral would not be a 4.5 hours drive from Savannah....instead it would be about 4500 miles from Denmark because we would already be back home.

Have you ever seen the face of a kiddo who has just learned that Santa does not exist? Well that was the face of my poor husband this week.....

Until the second email came......
The email that said how sorry Jon was that the launch had to be rescheduled at a time that Mads would already be gone back home to Denmark, but that Mads was welcomed to still make the drive down with Michael and Rebecca on the 19th to the Kennedy Space Center and use the free tickets for the tour.... with him!

Would love to meet you. Come on down on the 19th of April. The tickets will work for that time. I'll be here. Let me know for sure when you will be coming. My personal cell # is xxxxxxxxx....JON

So my disappointed Viking has had a little of his excitement restored. He will not get to see the shuttle blast off, but he will get a tour of the Kennedy Space Center from one of the Space Shuttle Challenger's former pilots... Still pretty cool when it comes to fulfilling childhood dreams.

The Russian Rowing Team (drunk) messed up our flight once too... :)

I'll be mad at the Russians with Mads. ...at least he has Sonic. Orange Creme Slush right???

Poor Mads! At least he still gets some quality astronaut time, that's a neat treat!