Make a run for the border... It's no longer just a Taco Bell Commercial!

I wrote this blog in August 2008, shortly after I moved to Denmark.:
The Roads Throughout Europe


I was just reading again what I had written because I remember what impression it made on me that first time I "crossed the border" back into Denmark. Especially this paragraph stood out to me today:
I also learned about driving from one EU country to another. It is as easy as driving from Texas to Oklahoma because there are no border offices between EU countries. Here is what you find at the border between Germany and Denmark. To us....after 2387 kilometers, it said "WELCOME HOME!" 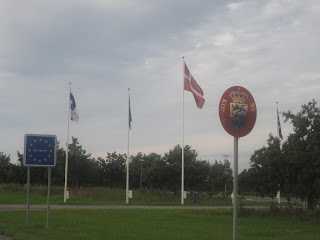 However in light of this week's events in Denmark, I realize that this blog from August 2008 is a thing of the past; or it will be in about two weeks because Denmark (at the suggestion of Dansk Folkeparti) is instituting border controls throughout the country....

These new controls will be increased at the airport and the harbors, which of course are understandable since people can arrive to Denmark by plane or boat from a variety of locations. It's the border patrols between Denmark and Germany as well as Denmark and Sweden that really have me wondering what on earth is going on.

The claim (from Dansk Folkeparti) for why we NEED these new and "necessary" border patrols is that we have had an "extreme increase in crime from people coming in from outside of Denmark. They come, commit crimes and flee."  (Yes, DF, we will support your suggestion of border patrols because as you WELL know, FEAR is a GREAT motivator of the common man. Make us fear the crime and we will do anything we can to stop it!)

However, I am CERTAIN that these kinds of crimes DO happen.
But I wonder if there has really been a substantial increase in the last few years??
And I wonder how DF knows that these are non-Danish residents committing the crimes if the said criminals are fleeing (which I assume, the meaning of "flee" in this situation is the actual meaning of the word, which is "get the hell outta dodge without getting caught"??)

But how on earth will you determine if those coming in are potential criminals?
Will they have a special notation in their passports (which most often are from another EU country)?? Will they not know the password to get in (which I assume has many words that has "øv" in them because we foreigners CANNOT make that sound!)
Or better yet, will there be a set of three 6s on their foreheads?
Or wait, will they possibly have REALLY NICE TANS no matter what time of year it is?

In order to stay in compliance with the Schengen laws of the EU, Denmark's border patrols cannot stop every car attempting to cross the border, so the stops will be RANDOM. And again, I have to question DF's use of that word.
Will it be the real definition of the word "random" which means "having NO predetermined factors when selecting the sample"?

I certainly hope so.
But I fear not.

I do want a decrease in crime.
But I wish we could accomplish an increase in tolerance (not of crime, but of PEOPLE) just as easily as putting some guards in designated places around the country...

So now we wait and see what happens next.

We have boarder patrols in Norway and crime is on the rise....so it is a poor argument on the part of the Danish government...they sound like they have nothing better to do then make up stupid laws and regulations...

Probably make bringing stuff from Germany into Denmark harder also. Here in Norway we are limited as to how much we can bring back without paying customs taxes. If you get caught with too much they will take it away and give you a big fine.

We seriously live in a socialist country despite the fact they claim it is democratic..sounds like Denmark wants to get back to that kind of system also..

We were never discriminated when the old border checks were in place, even when entering with foreign license plates.

Racism and discrimination will be tolerated. It is already embedded into Danish society. Customs officials are almost bound to begin racial profiling. They're not generally known as being the tolerant types, are they?

This is a nightmare scenario proposed by the lunatic far-right and accepted by the lunatic liberals in order that a deal can be done on an unrelated matter. The cost is nearly 300 million kroner a year. That cost is met by the taxpayer. The police have already themselves noted that this initiative would make little difference to crime rates in DK.

It is politics at its lowest common denominator. Absolutely disgraceful!