As a person who grew up under the American Standard Measurement system, I have a SUPER hard time with the metric system. I can cook in Centigrade, I can drive in Kilometers per hour and I can tell you how hot or cold it is in both  F  AND  C! But that is just about the extent of my abilities.

I cannot understand that the wind is blowing "10 meters per second" because where I come from we measure wind in MILES PER HOUR.

Where I come from we measure newborn babies by pounds and ounces; for example Jess weighed 10lbs and 5oz when she was born and I can visualize what that looks like. Tell me that your friend just had a baby that weighs 3500 grams, I have this picture of a GIANT newborn... because grams just don't make sense to me!

If I could figure out the connection between kilograms and pounds, I know I would like Kilos better because the number is SMALLER! But again, it just does not make sense.
For 38 years, I used ONE SYSTEM, except for those 6 weeks in the FOURTH GRADE when we learned about metrics, so to switch over now is NOT SIMPLE. 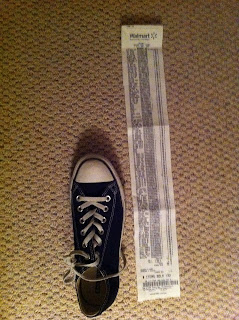 And honestly I have no idea why America does not use the Metric system.... since just about the entire world does!  I love that we are unique and "American", but this is one time we do a disservice to our people!   So because my world is such a mixed up glob of American Standard Measurement and Metrics, I have created a new way of measurement.  Forget inches and centimeters...   Just look and your next receipt from Wal-mart and use its length to determine how much money you spent.  See my most recent one from April's trip to the US... It is about 2 Converses long.. which is right about $500... Simple, don't you think?
Ok of course, this idea is nuts. We cannot measure expenses by the length of the receipt... but when you think about it, wasn't the idea of determining an entire system based on the length of a king's foot just as silly, knowing that his predecessor might be much smaller or much bigger....  But hey, that idea stuck years ago, so maybe mine will too!

But regardless of the acceptance (or lack) of my creativity, I want to vote that the US begins the switch over to the metrics..... It's never too late and that way any future American girls who marry Danish boys will be READY to start their new lives in Denmark!

Booo - they convinced you! Do not get sucked into their perfectly logical system. It's evil I tell you!

Oh, and while I'm here, take a look at bicycle ad in this country sometime and look at the frame sizes. Most of them have NOT been converted, you will still see them listed as 26" or 28" !! There is some stuff in the hardware store like this as well - they don't call it an inch, they have some other name, but it goes back to the imperial measuring system.

And hey, at least we're consistent in the US, except for soda which, for inexplicable reasons is sold in liters. You should check out the UK for total confusion on measurements!

Danish inches are slightly different to the Imperial/US inch measurement which equals 2.54cm. It's to do with old measurements usually in carpentry and building, it's called a 'tomme' and is 2.61cm. Today, I'm pretty sure tradesmen in Denmark use millimetres, but the Danish inch should at least also be understood. Most tradesmen internationally use millimetres because it allows for finer accuracy. (My Dad's a tradie)

As an Australian who grew up after the switch to Metric, I can't understand Fahrenheit or Pounds or Gallons - but because colloquially height is given in feet and inches I understand roughly feet and inches, but nothing else. I really don't get the UK weight measurement of a 'stone'. I do like that the UK is really good at putting both the imperial and metric systems on food labels though.

Hurray - we went metric in the UK years ago, and now I can't imagine pounds either (although they are still in use in the UK...)

I'm with you Kelli. We are the odd man out. We need calculators to communicate measurements with the rest of the world. It's it enough that English has become an international language between nations? I's like to make those Danish recipes I see with a converter.

Mrs. S / Kelli,
You are still as hilarious as when I first met you!! I JUST found that you have a blog.. and it's funny because I feel like I'm back in my "xanga" days as I'm leaving you a comment! One of my goals on my summer bucket list is to update my blog quite frequently... but note; it will be WAY LESS EMOTIONAL than my xanga hhahaha. Btw, I came across my xanga a couple days ago (peopleTHINKsheCRIEShappyTEARS.. wth?) & just thought to myself 'Lordy, Lordy...' I'm sure you were saying the same at the time lol!

You seem so happy.. and I agree, American's should switch over to the metric system. Yet, I don't know how I feel about giving birth to a 3500 gram baby...

I agree! I'm fairly new in Denmark with my Danish husband and I just don't get the metric system! Thank God for conversion apps! But on the plus side, I really didn't want to know exactly what -10 C was in F this past winter!

Oh, don't start with the "tommer", Patti. That just makes it a lot more confusing. :p

The "tomme" apparently originally comes from the width of a person's thumb, hence the name and the difference sizes. My "tomme" is just 1,8 cm. ;)