#4 An honest to goodness dislike

Like:
I like that there are WAY more things about life in Denmark that I LIKE than I DISLIKE, but today's dislike is one that I cannot wrap up in a pretty package to make it sound better... I honestly dislike this issue..... 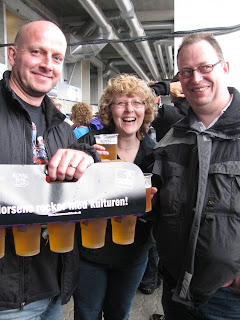 I was planning to use THIS picture as an intro to my "dislike" today... Sorry, Mads, Patti, & Ole.... but look in Mads' hand and you will notice the thing that bothers me about Denmark.


I honestly dislike the amount of alcohol that is consumed in this country on a regular basis. Don't get me wrong-- I LOVE a cold beer or two on a Friday night, but in my opinion, as a culture, Danes drink too much. It is not how OFTEN they drink, but HOW MUCH they drink at one time.


Mads had just purchased this (very cool, in my opinion) "beer holder" at the Bon Jovi concert last week. Now he bought this 5-beer special because you save money buying it this way instead of one beer at a time...and there were 8 of us in the group so 2 of these holders were a great deal! However in the US (which in my opinion is WAYYYY too conservative when it comes to alcohol sales) we do not allow one person to buy more than 2 beers at a time. Mads found this out at a Dodgers' game in L.A. last year. He and I went up to buy beers for our group of 7, but they would only let us buy 4 at once (2 per person) so we had to go deliver those 4 and come back to buy the other 3...he was SHOCKED! (But the fact that we could come right back to the same man and buy three more shows how stupid this policy is!)


Anyway, these cool beer holders are often bought by one man at a concert or football match and consumed entirely by that same one man....and then he goes to buy more, plus a few shots along the way.  I have seen this so many times in the 5 years I have known Mads, and it STILL bothers me. I watched as I walked to the bathroom at the Bon Jovi concert last week to see how many people were already totally wasted (around 930pm) and it made me sick. And they were not just the 20-somethings- they were my age and older.


Funny thing was that this blog for today was already halfway written when we went to the train station Saturday to meet the Internationals for a trip to the Jazz Festival in Silkeborg. And I was only planning to use the pic of Mads and the beer holder as my "supporting evidence"; however as we walked into the train station, there were two guys headed to the Roskilde festival that just proved my point better than a 5-beer holder ever could.... Take a look: 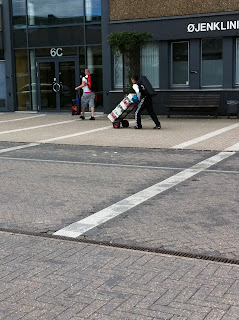 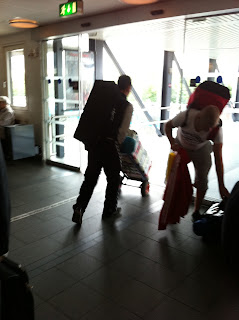 No, they are not workers from a delivery company.....they are merely 2 guys headed to a weeklong music festival. Not sure if they have ANY CLEAN UNDERWEAR in that bundle of theirs, but lord knows, they have plenty of beverages..... As we say in Texas....'NUFF SAID.
at 5:45 PM

I notice a LOT of drinking here also- in excess but I do think the Danes have this one. What gets me is all the adults my age and older who get schnockered! I am with you a few drinks to relax and enjoy the evening but I´d like to remember the evening also....

I don´t know if you read the time Stig and I tried to go against the flow and only have a few drinks at a party one night- boy did we feel out of place...everyone was so schnockered and we were sitting there bored to tears....really bothered me, wanted to prove to my kids that you could have a fun time without getting toasted but that was a huge fail- in that type of enviornment you need to get toasted to have fun, which is probably why I don´t like going to parties very much...too much pressure.

i have never heard of a 2 beer purchase limit, ever. We have always bought multiple beers at games, concerts, etc...meaning more than 2. I've also served it at events and we were never told that. I will have to ask around on that one.
Annnd one thing I have noticed since moving back to Texas. We are definitley not conservative on our drinking. Taking a closer look at things now. We do drink a lot in Texas compared to other places. I think we can hold our own against the Danish. Or maybe it's just the people who live at the Lake....hahaha.

Aubrey, if someone at a ball game is selling 1 person more than 2, he is breaking the law... of course it happens, but as a daughter of a retired Texas Alcoholic Beverage Commission captain, I can tell you that they risk losing their liquor license if they do it.... And there are undercover agents testing that kind of thing out ALLL the time....

I rarely see really drunk people nowadays, but I guess it depends where you go. That said, once a year, I go to a girls' party night, where the others get really plastered. I usually go home shortly before midnight and leave them to it, which has never been a problem.

Oh, and midnight being the point where the conversation level takes a nose-dive. ;)

I hate the excessive - drink till you lose consciousness - drinking you see over here too.

I read recently that Denmark has the 4th highest beer consumption in the world per capita, so you are spot on. The think I LIKE however is most people in DK take mass transit and rarely drive if they have even had one drink. And those guys are probably going to SHARE SHARE at Roskilde. I cannot believe we pay people in America to make sure no one buys more than 2 beers at a time. I did not know that. But if your Dad was ABC, you would know. Of course America was founded by Puritans so I would say like you... "NUFF SAID'. It is hard being Danish American and not having any Puritanical culture. (No,they probably don't have any underwear in those bags. They won't need them is they do the "Naked Race". ;-) Your post was very informative. Thanks.