LIKE:
This is one of those cases in which Denmark gets a point, but so does the U.S. 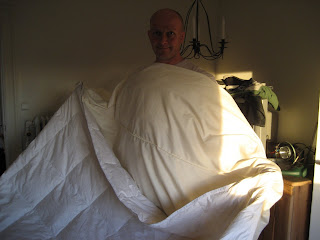 I ABSOLUTELY LOVE the "dyne" in Denmark. It is the thing we cover with on our beds. We do not use top sheets (which I admit took a LOT of getting used to.... I actually made Mads try having one on our bed the first year...That did NOT last! LOL), so we cover with these "Dyne". Most are like we would call "down comforters" in the US, but they are not heavy. In fact we have "summer dyne" and "winter dyne" determined by how thick they are. You slip them in a big giant slipcover (like in the pic)  which is somewhat your bedroom "decor"--that is where your patterns and prints come in.

I honestly thought these were quite strange at first mainly because I did not believe they would keep me warm in the winter and somewhat "cool" in the summer, but they do. And here is the STRANGEST part (which I now LOVE!)....each person in the bed has his own. So on a big bed for a couple, there are 2 dyne. Not because Danes do not like to share, but because it really is better. I know it sounds strange... you have to experience it to believe it! So if we ever move  back to the US, one Danish thing we will DEFINITELY take is each of our dyne!

DISLIKE:
As much as I love the Danish Covers, I VEHEMENTLY HATE the Danish pillows.
(Is that a strong enough description to let you know how I feel?!)
They are usually square and are the flattest things I have ever seen. You cannot scrunch them up and snuggle with them (as I do with my pillows at night), and you feel ZERO support for your head when you sleep. You really cannot even stack them to make them fluffier because they just get flatter. :-)
They are truly (in my opinion) AWFUL.
So when I came to DK, I brought my own rectangular American pillows...and you want to know the funniest part? After a few months of being here with MY 3 pillows that I brought, I noticed that one disappeared to the other side of the bed, so yes, now we have bought Mads his own American pillows so there is no argument at night about whose is whose!

exactly! We had to go buy a rectangular pillow for me in Copenhagen. I love having my own dyne, We had to go to Ikea to geones the right size for our American bed.

I am a total convert to the individual dyne system! And I too sleep with my American pillow. The square shape just isn't working for me.

I completely agree with the pillows. They are awful! I am considering my own pillow when I come back from a home visit! I still haven't got used to the one dyne per person. I do like not sharing, but I wish the single size was a bit bigger. My queen duvet at home was just right for me, alone. I am quite a princess when it comes to sleeping haha.

Stig wants to have a giant dyne for two people, he thinks it would be more romantic to be under the same dyne..but I am with you, much better to have your own!!
And may I please ask how you pack pillows?? I would sure love to bring over some pillows from the states but I would assume they would need several suitcases just for them!!

The duvet + duvet cover were not a huge transition for me when I came to Northern Europe, we've been using the same system in the US for new bedding (for some reason, Ikea craze, maybe?). But the idea that each person has their own duvet was new, but... awesome, all the same, I agree!

Likewise with you, I couldn't get used to the pillows here. Maybe because I buy them so cheap - I'm convinced there has to be a decent pillow somewhere. Either way I snatched one from home a couple of years ago that has been accompanying me ever since :)

Amy-- I actually INSISTED that we buy one "common" dyne when I moved here... it just seemed so weird to not be under one cover!

I also insisted that we buy a "top sheet" because it was what I was used to!

BOTH DROVE MADS CRAZY, but he tried...and after 6 months, I admitted... The Individual dyne ROCKS! We put the big one in the basement never to be used again! And we got rid of the top sheet! So I am a true convert!

And you would be shocked how easy pillows are !! We have brought pillows twice-- this last time was 4 new ones- 1 per suitcase and they smush down SO easily and weigh nothing! So they are a great thing to add to a suitcase full of JIF!

I like having no top sheet too, but I really am not into the two separate dyne. Psh.

I also insisted on the shared duvet - how else was I going to be able to scoot over and snuggle with him in the middle of the night if I had to maneuver out from under my duvet and in under his?! But then I need a heavier duvet much earlier in the year than he does (he pretty much uses a summer duvet year round, the polar bear) and I got sick of him kicking the duvet off of me when he got hot or worse, throwing his half of the duvet over me, trapping me under a massive mound of goose down!

Still haven't figured out how to easily do the cuddle maneuver, but with a new baby, it's sort of a moot point. LOL!

I bought 2 nice pillows at Ikea that could support our heads properly. I hate flat pillows.

I hated the dyne...ugh. I thought it was way too heavy. More then the US ones and could not stand it without the sheet. I looked forever for a US one. However my husband says he likes the US sheets and comforters better! He thinks they are more cozy and soft.
Ya the pillows I could not do. I think that is why I got stiff neck all the time....grrrr.

Well, I guess I am part Danish. I refuse to use a top sheet. I've always used my down comforter and duvet cover. I have a summer lightweight comforter and a heavy down winter comforter. Top sheet seems pointless since I can wash the duvet cover. It's super-hard to find the right pillow, isn't it? I think Ralph Lauren makes the best ones, but they're $100 each!

Ummm, could you provide a Dane who whole-heartedly agrees with you on the pillow issue with a clue as to where one buys the best (but still affordable) pillows in America? (If at all possible, some sort of chain that has stores in all states?)