A story of teamwork.

The only thing that makes me sad today is that I cannot run downtown to a shop and buy new 2011 NBA CHAMPS tshirts for me, Mads and Jess! (But no worries! I can ship them to mom and she can ship them to me! lol)

This morning at 5am (dansk tid) my Dallas Mavericks made history.
They have only been an NBA Franchise since 1980 and ever since that year they have been working toward one goal-- to win a championship.

Dirk Nowitzki (my MOST FAVORITE NBA PLAYER)  joined the team in 1998, and even though other teams have attempted to lure him away and even though he met defeat in the 2006 finals, he never wavered in his commitment to the Mavs. And last night as he was named MVP of the 2011 NBA Finals, we were reminded why. 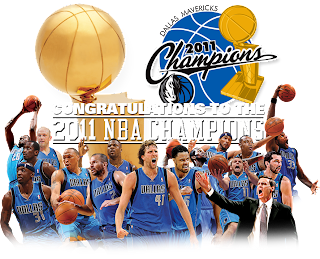 Yes, Dirk is a superstar- perhaps one of the best to ever play the game, but unlike the Kobe Bryants and Reggie Millers of the world, Dirk plays on a TEAM of 15 men because at any point during a game, whether he is on the floor finding his "sweet spot", passing to an open Jason Terry, sinking more free throws than just about anyone EVER, or sitting on the bench shouting encouragements to those on the floor, DIRK NOWITZKI remembers that HE IS ONLY ONE of FIFTEEN.  You see that every single game where his PRESENCE keeps that team going and focused. You see that every time he is interviewed post-game. And we saw it last night when he held that championship trophy in his hands. It has NEVER been "all about Dirk"; but rather ALL ABOUT THE DALLAS MAVERICKS.
I am proud to say again that I am an MFFL... a Mavs Fan For Life and it is because of what my Mavs and my Dirk (oops, did I just type "my?) stand for... TEAM!

Basketball is more than just a sport.
It is a way of life because we all need to remember we are a part of a bigger team. Jim Casey reminds us of that in The Grapes of Wrath. Dirk Nowitzki reminded us of that last night!

So you have to love this article.
http://sports.yahoo.com/nba/blog/ball_dont_lie/post/Miami-ad-congratulates-the-Heat-for-a-title-they?urn=nba-wp4900

OMG Pdx.. had not seen that!
TOO FUNNY!

congrats to yall!!! ill be honest, i stopped watching pro-basketball some years ago (i think it was around when Iverson took over the league for the few years he managed to stay out of trouble), but i was pulling for dallas in this series :-)