Germans are being encouraged to boycott Denmark.

Because THESE are the folks that are going to feel the BRUNT of the new border controls.

These scenarios have been played out for decades. We create laws to keep the BAD PEOPLE (this time, it's those from certain countries who are coming into DK purely with the motivation to commit a variety of crimes) from doing the BAD THINGS and end up hurting the GOOD PEOPLE we were supposedly protecting in the first place.  Why is that??
Because BAD PEOPLE will always find a way around our new rules.
They always do.

I would love to be a fly on the wall of some of these customs checks at the Kruså border.... just to hear the conversation going on between the driver and the customs agent. I imagine this scene is a typical one; the agent, exasperated at having to try and explain what he is doing for the umpteenth time, finally just raises his arm and points (as this man is) toward the east... toward Christiansborg.....and begs the driver to understand that he is JUST DOING HIS JOB. 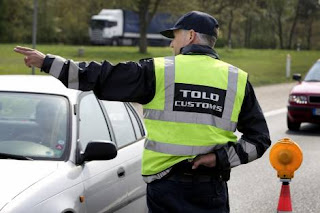 Do you believe that the laws were about stopping bad people doing bad things?

The guidance in English from Danish parliament did not even mention this as a reason for having tightened border controls, they said it was all about customs and tax.

I'm more of the Marlene Wind school of thought, that they were just about appealing to the inner brute... this was pure electioneering and not about crime or customs at all.

What do you think?

I'm with Wind - it's an election thing and DF doesn't give a crap if it offends Germany or bothers the EU or results in some Danes losing income since they don't think much beyond the end of their own nose. Any crime or tax dodgers that get caught are just a happy afterthought. One that doesn't justify the HUGE cost having a 24/7 customs agents on the boarders.

It's an embarrassment to Denmark. The police have already said it won't make a difference, yet the reforms go ahead anyway. As was noted above, this is to appeal to the "inner brute". It shows Denmark to be a very small-minded little country indeed.

it's so unfortunate that once again bad people ruin good things for good people :(