I come from a country that has four main coins that you can find in a person's wallet at any given time. And of these four coins, the biggest value is 25cents (1,25 kroner) so if you pay for something with coins in the US, it MUST be cheap.

Well that kind of thinking has really set me up for trouble in Denmark.
Yes, Denmark is ridiculously expensive. That is a fact. 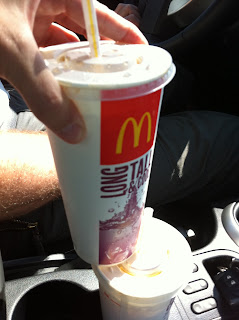 And in Denmark we also have a handful of coins that you can find in a person's wallet at any given time; however, of these coins, the biggest value is 20kroner ($4). But it also the same mindset as in the US -- when you pay for something with coins in DK, you also think it is somewhat of a bargain.

However, I just had a reality check about how this "paying with coins = bargain" can really get you!

We drove to Germany today to go grocery shopping (AKA: to make a beer/soda run) and just before we crossed the border, we stopped at a Shell Gas Station to fill up. I went inside to buy us each a soda... knowing full well that there was a chance that I was going to have to walk across the street to the McDonald's because I bet Mads that the Shell station would NOT have ICE... and sure enough, they did not!

So I went across the street---ordered 2 cokes (with EXTRA ice because in DK you only get 3 pieces! LOL), paid for them with some coins in my wallet and then walked back across the street to the Shell station where Mads was finishing up.

Then it hit me.
I asked Mads to guess what I just paid for the 2 cokes.
Of course he guessed right IN KRONER (42) and then I said, "DO YOU REALIZED THAT I JUST PAID OVER EIGHT U.S. DOLLARS FOR 2 COKES AT MCDONALDS?!!!"
Seriously. I have done it before, but never really thought about it because "it's just coins"......

WOW.
So be careful.
Those coins will get you every time!

Couldn't you wait and buy it in good old Germany?? It's much cheaper!!! :)

OMG!!!! Lol such a reality check sometimes for sure :) i just saw a 20 pack of soda at a grocery store here for over 20 dollars...ON SALE. i was rather disgusted.

right now here i have been checking the prices on EVERYTHING. i mean EVERYTHING. i think adjusting to prices here is difficult because i have no job, so my money perception is still based on what i made in the US...and it's kind of kicking my butt.

I paid six bucks for three sodas at a gas station in California, thought it was a rip off, and had to remind myself of soda prices in Norway. Sure enough, the gas station we stopped at for a late night pit-stop on our way home was running a "deal": 60 kroner for two 1,5 liter sodas. D'oh!

Super Best had an American section a year ago (in Jutland). The weirdest thing was a small jar or American peanut butter (can't remember the brand, but just ordinary stuff) for 70 kroner! I reckon that works out at over $13! Oh yeah, and a can of coke in our local petrol station for 20 kroner (nearly $4)! Unbelievable. But like I always say, they have to triple the prices to make up for all the loss of trade due to their short opening times!

That's one thing I don't miss :-) I'm lovin' my 59 cent jumbo fountain soda from Road Ranger. Come visit me and I'll buy you and Mads all the jumbo sodas you want!