My sweet friend, Tressa, another Texas girl living in Scandinavia, wrote a very touching blog this week about the tragedy in Norway. She works right outside the area where the bomb was detonated and has been so touched by the way she has seen the local area, as well as the entire Scandinavian community come together in support of those that were affected by last week's events.

Just looking at the flowers she photographed outside of the church in Oslo, you can see how many people are standing in support of those that are in mourning....

She also shared a link that I think is a wonderful way to show exactly who is standing together, supporting the people of Norway. I encourage you to check it out and enter your information to show that "Vi holder sammen" (We are standing together). You can see how many people from other countries have already signed up. 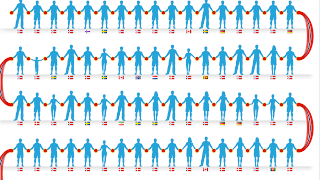 The Norwegian government has responded to the actions of Anders Behring Breivik in a way that shocks many of us...especially those of us from places that use capital punishment for terroristic acts such as his....  They have been quoted as saying:

I admit that I am still one of those that believes strongly in the use of capital punishment... and I think that is exactly what this monster deserves, but I do respect the way that the Norwegian government has chosen to respond. Because it is in times like this that your convictions are put to the test, and I think that they are most definitely standing by theirs... and I applaud them for it.

Such a tragedy. As I wrote on my blog post, I don't believe we can answer violence with violence - as that will just escalate.


When a reporter asked one of the survivors how she wanted people to fight terrorism, she replied:

“If one man can show this much hate, think how much love we can show together.”

Wow, I am still in shock over this event. My heart really goes out to the families affected, and really the whole wonderful country.

On another note, I am so glad you stopped by my blog and said hello! I love meeting fellow traveling Texas gals. We had friends that lived in Herning for hockey this past year and LOVED it. Looking forward to following your great adventure :)