Emmitt has been with me for a very long time.... More than 13 years, in fact. 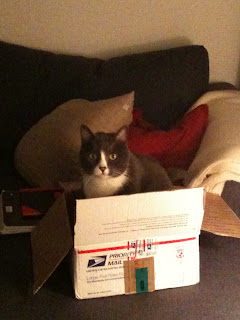 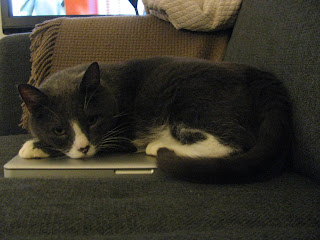 I will never forget the day I found him. I was a weekly volunteer at the "Youth Opportunity Center" on the east side of Wichita Falls, Texas and one afternoon we heard a meow from under a huge bush. 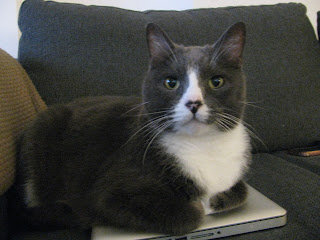 Long story short, I found out that "Oreo", the unofficial mascot of the park in that area had recently had kittens... several kittens which meant that several babies were going to need homes. Jess was with me that day, as she was most days when I volunteered at the center. We already had a cat. And we already had a dog, but we looked at each and the decision was made--- we were getting another cat.  Around this time, I was a pretty big fan of the Dallas Cowboys--in particular #22, so what else would I name my new cat??? Emmitt, of course! 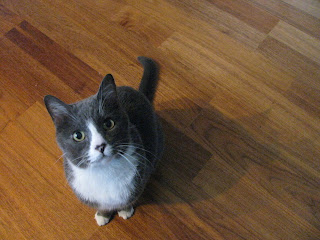 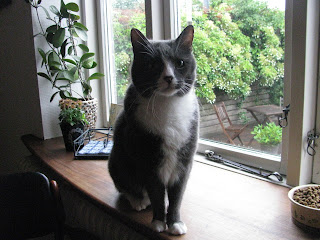 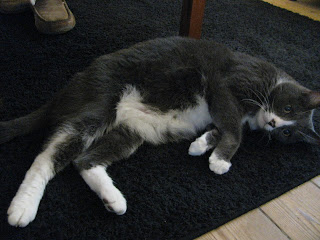 Emmitt has been through a lot. In the first 10 years of his life he moved from quite a few different houses/apartments in Wichita Falls, McKinney and finally in Allen until at the ripe old age of 10, he made that trek across the Atlantic to his new life in Denmark.  The interesting thing is that Mads and I talked about whether or not I should bring Emmitt; it seemed almost cruel to bring such an old guy on such a long journey, but I just could not imagine leaving him. So in April 2008, I loaded him and Albert up and brought them to Denmark. And I have NEVER regretted that decision once because you see, Emmitt is no longer "my" cat. Sure, I have WONDERFUL memories of him; plus Jess and I have lots of stories that involve him, but Emmitt has decided that although he loves me dearly, he belongs to someone else... MADS. 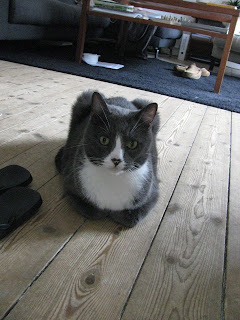 I have never seen a cat act so much like a dog as Emmitt does. Albert is my faithful companion and Emmitt is Mads'. It is the most precious thing. He greets us each morning at the bottom of the stairs and if we are not up when he thinks we should be, he hollers at us from below. And if we do not get up fast enough, he comes upstairs to get us. He has a routine that he has trained us to follow :-) and he adds so much to our home. And I must say-- he freaking loves life in Denmark. Texas was so hot that he never really could enjoy his time outdoors, but here, it is quite a different story. He absolutely LOVES being in our backyard (I mean... GARDEN!) 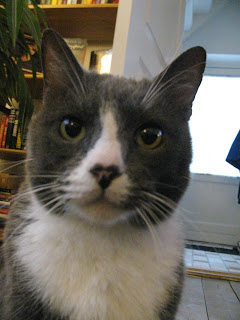 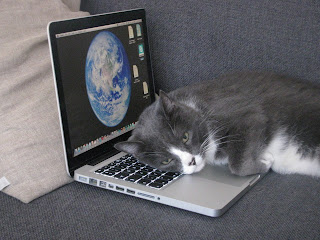 I know some folks say they are not "cat people", but I am certain that is because they have never encountered a cat like him. And I figure he is special enough that he deserves a blog post that is ALL ABOUT HIM!
at 5:32 PM

Emmett is a beautiful cat for sure!

I love this post! I found my first dog Toodle as well, outside the Denton Civic Center Pool, under a bush. I was 3 at the time, but I was pretty adamant about taking the scruffy undernourished guy home, so glad I did, he was a full-fledged member of my family for the next 10 years.

We love Emmitt! And I know the feeling as several of my cats decided Ole was much more important than little old me.

I am so a cat person! I wasn't able to bring my other cat from Canada, but she's living happily with our family dog.

Aww...how sweet! I want a pet so bad! I used to volunteer at the animal shelter, and it was all I could do not to bring a new pet home every day. Hopefully soon I will be stable enough to get the dog I have been dreaming of. Although, I grew up with a cat, and this post has kind of made me feel like I should have a cat again.

Great Emmitt pictures! I miss him!

I would have a tough time moving. Besides the horses and dog I have 12 cats. It's a lot of work, but I would have a hard time giving any of them up.

What a lovely cat! And good on you for taking him to Denmark with you. Ours travelled here also, but much less of a distance than yours.

Our oldest is 17-years now, so Emmitt is still a youngster in comparison.

Emmitt loves Denmark and the warmth of your computer as it's freezing cold most of the time. Just had to say that.

emmitt seems quite awesome :) animals can bring so much joy into a home and im SOOO happy to have my dog here in norway with me!

and wichita falls!? ;-) i may have lived there for a year when i was in the military :) brings back memories!