I am quite certain that the world remembers what happened the last time that a Texas governor moved his residence to 1600 Pennsylvania Avenue...

Even though I voted for Bush the FIRST time, I have to admit.....he was not the best thing for our country. However, most of his inadequacies were just that--- INADEQUACIES. Because deep down, I believe he is a good person and he wanted to do what he THOUGHT was right. He just kept messing things up.

But now America has another opportunity to send a Texan to the White House and even though I am 5000 miles away, I gotta tell you-- that idea scares me to death. 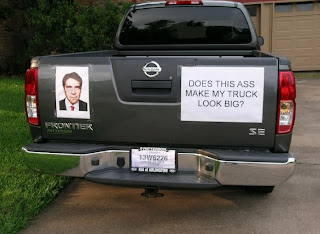 But then you read things like this and realize this is not a joking matter.


So not only does he support Texas' right to secede from the Union AGAIN, but he believes this other nonsense as well.

I am not usually one to come out and speak for or against a candidate, but now I must.  Rick Perry has his own agenda for the United States and it is NOT an agenda for the good of the American people. Whether you are Democrat or Republican; whether you like Obama or not; PLEASE PLEASE PLEASE research Rick Perry in depth before you decide that he deserves your vote. You need to know WHAT you are casting your vote for.

2012 is NOT the year to just vote straight-ticket Republican.

this is what worries me most for the american people.

i will admit, i loved bush. i think alot of his inadequacies were leftovers of problems that had been brewing up for years (i worked intel in the US air force...so i had alot of feeds on things that other people may not have had). but like you said, bush was a genuine and good hearted person and i feel like he would have put his life in front of every single life in the country and i really stand by that. i also felt safe as an american with him even though the rest of the world and americans themselves HATED him.

rick perry scares me. i am quite republican myself, but definitely more liberal with social issues (i 100% am for gay marriage, etc). when i read the constitution changes he wanted to make the other day, i was petrified. i feel like obama is trying to run a socialist country (a more socialist gov't works for some countries but not the US in my opinion)...but realistically, that is kind of what perry would try to do, just from a different angle. to me, socialism is too much government interference. and to want to abolish certain amendments because 'you' dont care for them is absurd. it is not what is best for the american people.

im scared with all the crap obama has put america through (can you tell im bitter he even made it into office?), that americans WILL vote an all republican ticket...and while im very republican, i want what is best for the country and he is definitely going to have to change his views a bit to get my vote.

i was really hoping a good and STRONG candidate for the republican party would have started brewing up a few years ago...someone we KNEW would run for Pres and someone we knew would fix the shortcomings of recent years...but no one has. i really like romney's views (republ. but a bit more to the left), but he was never strong enough to head the country.

AGH....sorry i wrote so much, but i am happy to see someone who sees perry the same as i do!!

hope you're having a great weekend!

Having followed RP up close for many years and seeing what he has done in (or done to) Texas, I am sickened by the idea he might get the chance to do the same to the rest of the country! Being from Texas makes it worse, I think, because you really don't want to be associated with that guy. BTW, I LOVE that picture!

I'm not going to get into a discussion of politics, tempting as it may be. I'll just agree with you on Perry - he's bad for American in SO many ways. I'm almost tempted to switch parties just so I can NOT vote for him!

Anyway, funny story - back before the last presidential election, I was in a bar in Copenhagen and a guy tried to hit on me with the whole "isn't Obama awesome, bet you're really excited to vote" line (it's better than the "is heaven missing an angel" but still, seriously?). This had somehow become THE standard pick-up line and I knew where it was going - the US sucks, Denmark is awesome, can I get your number? Blah blah blah. So instead I interrupted him and asked, "What makes you think I'm a Democrat?" And he looked TOTALLY confused and said, "Because you're here." He wouldn't believe me when I said I was a Republican (okay, I'm not - but I put forth very good reasons why I was voting for McCain).

Republicans, he assured me, do not travel to Europe.

I think ANYONE who votes a straight ticket is an idiot and is doing it out of laziness and an unwillingness to learn about what each candidate is selling. As for Rick Perry, Michelle Bachmann, Sarah Palin, Mittens Romney... it will be a contest of who is less crazy, and the one who appears least crazy will probably get the nomination and win. (Also keep in mind Rick Perry has never lost an election.) I have said this for years and people just laughed at me-- the last good president was Bill Clinton! He was the only one who didn't F with educational programs or funding, didn't invent some nonsense we all had to comply with in public schools, and didn't drain the national budget of all its monies. But you know how Americans are-- Rick Perry looks good in a suit, has that country twang which people mistake as being an indicator of southern hospitality and charm, plus he's an engaging public speaker. Hopefully people will remember at voting time that he's the one who tried to make every girl in Texas get a vaccine to prevent cervical cancer! Total idiot.

Perry for President! Loooooove him and his craziness. And Arhaeogodess that just proves what I have said all along that Danes aren't as educated as they like everyone to think. I ran into this all the time and they lost every debate. Good thing my Dane saw the light and is now a full supporter of Republican beliefs and Perry. There is a reason he is elected over and over. OH and many of my family are teacher, actually almost all, and support him as well as friends.

Totally love the giant bumper sticker. I need to get one and change pictures on a weekly basis. Republican or Democrat most of our "leaders" are much less useful than they believe themselves to be. How allegedly intelligent people can make so many bad decisions is beyond me.

I second that..No republican next year or anytime. They leaves us with this mess in the first place and now they blame Obama for it..

I think everyone universally agrees he's kind of nuts, even the hardliners. The repubs I know are going to hold their nose and vote for Obama, because the options look pretty dire.

He's not doing himself any favors with the whacko ads, either.

By the way, staunch Democrat-voter that I am, living in Seattle has almost made me root for Texas to secede from the Union.

When I tell people I'm from Texas, the FIRST thing they say up here is "I'm sorry," and then they giggle.