If you were to ask ANY American, I am sure he/she would agree that the US Election process is TOO freaking long and costs TOO freaking much money.  And although I know that the Germans pride themselves on the concept of German Efficiency... but when it comes to the election process, NO ONE can top the Danes!


Don't believe me?
Check it out!


Today at 11:00am Prime Minister Lars Løkke Rasmussen announced the next national election.
It will be held on Thursday, September 15. 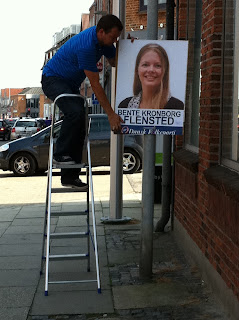 Within seconds of the announcement's completion, volunteers for the various candidates could be seen all over Denmark doing this:


So for two weeks Denmark will be covered in campaign ads and then the morning after the election, all of these posters will be taken down (yes, it is a requirement).


Just like in the US (where the process takes 18 months or more), most voters already know whom they want... but the thing is that in Denmark, they only have 2 weeks to convince us why they are the right candidate!

Very efficient! And a good idea - put the money where it is most needed - and that is NOT into campaigns.

That would be so refreshing! It seems as soon as they get elected here (US) they start the next campaign. It's no wonder they accomplish so little.

Lars Løkke has been dragging his feet on calling it for some time now. We all knew it was coming before the deadline of November, and the parties have effectively been campaigning throughout the summer, knowing it was just around the corner.

The cynic in me thinks that the short-time frame has absolutely nothing to do with efficiency, and everything to do with the Venstre government's belief that it is entirely in its own interests to play its cards in this way.

Don't know if you've noticed, I started a campaign on Facebook with a friend, to urge people to vote as soon as possible at their local Borgerservice. This service is usually provided for people who will be out travelling on the actual day, but is no longer restrictive to just that. I voted just hours after the announcement actually.

Now, imagine if everyone who could vote did so no later than Monday - then people will solely have voted on how the parties and politicians have played their cards beforehand, and there will be no tv-duels, no mud-slinging, no empty election promises to be had. THAT would be awesome, and even more democratic and efficient than ever!