The right to protest

I have been thinking a great deal about our right to stand up and be heard when we don't agree with something. This thinking led me to do some research about how we, as a people, have repeatedly used and abused this "right" in my lifetime, a mere 41 years. In my research I found that there are a MYRIAD of different sources on the topic, but that the majority of them all agreed that the "right to protest" is actually a perceived human right. It is not something that is protected by law, or constitutions, or the United Nations. Rather, it has risen out of a few other actually recognized human rights, such as the right to freedom of speech and the freedom of assembly.


But I think if you were to poll a group of random people, most would say that we as human beings DO have the right to protest...  But DO we? Merriam-Webster's defines the verb PROTEST as:

And with that definition, I believe that we DO have the right to protest, but with that right comes EXTREME responsibility.

And what we have seen time and time again are people standing on their perceived soapbox of PROTEST, yet doing something so much more extreme. And although I CANNOT understand or support a country that prohibits free speech, I can almost see why they justify not allowing it in their lands...... because somewhere in mankind's messed up mind, free speech turns to protest turns to this: 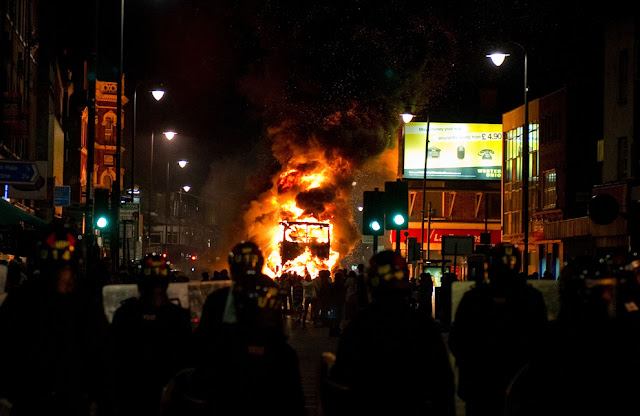 which then turns to this: 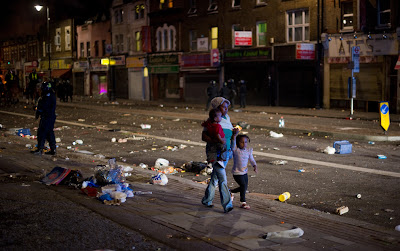 Children walking down the streets of their neighborhoods in Watts, in Cincinnati, in Los Angeles, and now in London.... seeing what their "neighbors" have done to their community...

They hear words like protest and police and riot and looting all in the same sentence and images are imprinted on their young, impressionable minds.  The burning buildings bother me; the litter and trash bother me; the fights between police and civilian bother me; however what these young eyes are seeing each MORNING AFTER bothers me the most.

You got it all twisted. Countries don't "allow" free speech.

People living in countries which freedoms they agree to curtail in order for the common good.

So, even though one might really want to be free to steal or free to kill, you are not allowed and we agree that is acceptable because we want freedom from murder and theft.

Free speech doesn't "lead" to riots. Free speech leads to uncomfortable (for ruling elites), social change which is how it gets banned.

This is what happened in my country, Kelli:

A man was shot, his family heard about it first in the news and along with the incorrect detail that he had been shooting at the police. They asked for confirmation and the police ignored them. An all female contingent (to stop trouble!) of protesters went to the police station for answers. They were ignored. One police officer and a female protester got into something (God knows what) and then bystanders were angered and then there was a riot. And then there was opportunistic looting.

The dead man's family are appalled that Mark's death has been used to get someone a new laptop.

The looters are actively avoiding confrontation with the police, if this were a "protest" about policing, they would surely attack police stations and officers. They are attacking electrical and fashion stores. It is not a protest or an example of free speech, is it? It's robbery.

The looting and arson and violence is already illegal and has nothing to do with the catalyst of protesting police treatment of certain families and innocent bystanders who fit a profile.

All of this could have been prevented.
Without unrest, there could have been no opportunistic looting and violence.
A lot of it has to do with people believing they have no voice, no real free speech in the community.

What free speech would you be tempted to ban, Kelli?

Anyway, let's focus on the positive, many many more people have been cleaning up than smashing and burning.

I would not want to BAN any free speech. I just have thought a great deal about why I can see why free speech is limited in other countries. (although I am 100% against this!)
Because if you read the progression of what you listed as the events and what has happened numerous times around the world...
people felt they were ignored.
people felt they had no voice.
bystanders and well-meaning friends become appalled and angered and begin to protest.
their protests lead to others being angered and joining in...
until you have so many angered people, with no clue what they are angry about and that is what leads to the rioting, the looting, the destruction.

That was the point I wanted to make...the progression of actions that seemingly spiral out of control....
all in the "name" of protest.

I agree with you, the answer is more free speech and the authorities/media listening to peaceful protest.

One of the things I really adore about the French is their really righteous protesting skill. :)