How cool is this?!

Since most of you don't get the Herning Folkeblad or read "AOH- All about Herning", I wanted to share a few pics from the news to show how COOL it was at school yesterday.
The candidates were there, ready to go! But I wonder if they realized that Herning Gymnasium's students were JUST AS READY for them! 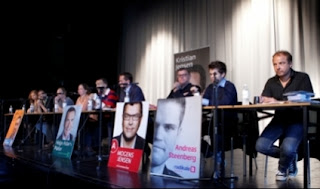 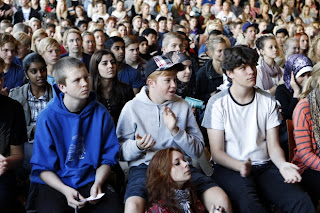 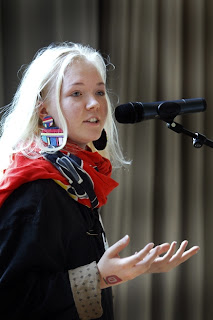 To the right is the younger sister of one my former students and I just love how CONFIDENT she looks at the mic....posing her question to the candidates!                                                        And the picture above is one of the pics of the large group sessions-- we have 900+ students, so they were divided into three groups of 300ish. But the cool thing is NOT that they were there... it is that there were many there who are NOT 18 yet and they will NOT be 18 next Thursday when it's time to vote. And the reason I know that they are not 18 yet is that the 3rd row is filled with my 1st year students--most of whom are 16 or 17... so the fact that they show up to participate in something like this when they cannot even vote yet is perhaps the coolest thing about the day!
I really do have to brag about Herning Gymnasium...not only about OFFERING a day like this to our students.... and not only about the students actually showing up to participate..... but related to the "Prøvevalg" (mock election) that they ran after the talks were over. Nearly 600 students cast their votes and the "Winner" of the election was "Radikale Venstre" with 26% (which is pretty typical for this age group). However the BEST PART was that of the 9 parties represented on the panels and on the ballot, GUESS WHAT PERCENTAGE of the students cast their vote for Dansk Folkeparti?

YEP, you guessed it....
ZERO PERCENT!
Makes me feel really good about this generation of future voters and future leaders!

Kudos and applause to all the students at Herning G!

Such a cool thing they did. These kids will remember this for a life time. And hopefully keep them involved in voting!

.....oh could the mock election at Herning Gymnasium be an indication of how the rest of the country would vote.....I would really love to see DF leave - but then again - DF doesn't get their votes from the young and well-educated.

Nice that DF did so badly, and I guess it shows that education pays off with regards to avoiding extreme voting habits. Sadly, not all Danes are educated or even sophisticated enough to spot DF for what it is. The party is remarkably close to polling the same as in the last election. This is all the more worrying given the vote for other parties in the Blue Block, has decreased.

I don't think we're rid of DF just yet. In saying that, its future is precarious given that the leader, Pia Kjærsgaard, is arguably the charismatic person (in Hitler terms) holding it together. It will be interesting to see what happens to DF when she goes (finally insane)!