How many Danes will vote??

As a an American, I am so curious about other countries who have high voter turn-out because traditionally, even though we CAN vote in the U.S., we often do not, and it makes me sad. In 2008 Americans really showed up at the polls and I hope that trend continues in 2012.


However today I am even more curious about voter turn-out because I am living in a country where I am not allowed to vote... I have watched the stats off and on all day and I am sure Mads and I will be watching the results come in tonight right up until the very end.


By 2pm today, after only 5 hours of the polls being open, THIRTY EIGHT PERCENT of registered voters in Denmark had already voted....
so I cannot wait to see the percentage by the time 8pm rolls around.


Will the RED BLOCK win? Or will it be BLUE?
And I wonder...is PURPLE a possibility??? 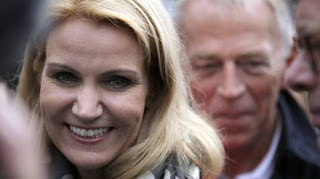 And will Denmark for the first time in history have a FEMALE Prime Minister??

That is a good percentage so far.

The Swedish news is saying the Social Democrats will win...


got a new outfitpost, tell me what you think about it!!!

May, it is usually between 70 & 80 from what I have read (89% was the highest in 1943)...
and I predict we will see that again today since it was already so high at 2pm knowing that everyone that works during the day would not be out to vote until after 4pm..

And yes, we´ll have our first female primeminister, allthough her party lost votes, and the current primeminister gained votes. But the supporting parties gained more on the red side, and lost more on the blue side (DF -3 seats, so you can do your happy dance now LOL).
The comming days will be fun to watch.

Wow! Very cool, why to be involved, Danes.

I know I'm late but I watched the results on BBC. Unfortunately, we don't hear any of this on US news as you know. Europe only exists as far as the financial markets here in US media.