Did you know that Budweiser has been around for more than 225 years? 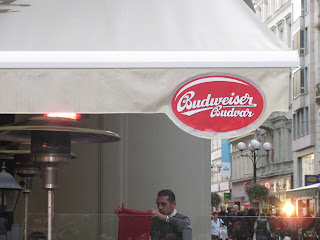 WAIT.... how can that be? America was only born in 1776 and although I am not a mathematician, I am quite certain that must mean that once America became a new nation, the first order of business was the brewing of beer?


What the heck? How can Budweiser be 226 years old when the country it comes from is only 235 years old?
It's a mathematical mystery!


In fact... it came from Czechoslovakia! Here's the whole story in case you are interested.


But in a nutshell, Budweiser Bier was started in Czechoslovakia in 1785. It was first exported to the US in 1871. In 1876 Anheuser- Busch started using the name and officially registered it two years later...something the CZ brewers had neglected to do....
Many lawsuits and heated discussions later, we learn that Anheuser-Busch can only use the brand Budweiser in North America because the name was originally NOT theirs. Those sneaky Americans!


Except really all it makes me wonder are these 2 things:
1) To whom do the Clydesdales really belong? Are they Czech or American?!
and
2) Why on earth is Bud-lite still so expensive in Denmark? I used to think it was because it was being imported allll the way from the US, but now that I know differently, I want to know why it is not as cheap as Tuborg Classic!

Typical American business practices, and I say that as a proud American. But the oldest American brewery is Yuengling, started in the 1820's.
+followed

That's pretty interesting. I didn't even know you could get a Bud-lite here! However, I do prefer a Tuborg Classic to a Bud. If only I could get some Shiner, then I'd be in hog heaven!

I was totally confused by the whole Budweiser thing when I was in Germany. People were going on and on about how great Budweiser was and all I could say was "ewww, gross, are you freaking kidding me?" Several angry Czechs later, we got it all figured out.

The US has been brewing for years - the oldest STILL ACTIVE brewery is Yuengling, like Elliot said, but according to www.beerhistory.com, Virginia colonists brewed ale using corn in 1587. But beer has been around for a very very long time. The Egyptians building the pyramids used to get beer as part of their wages.

Now the real question is why would you want to drink Bud Lite when there are far better beers to drink?

Tuborg Classic is my #1 beer (and actually a STELLA is a pretty close 2nd!)

but my "comfort food" version of a drink is a Bud lite in a bottle with a lime wedge. It just feels like home. I actually like the taste, and it just conjures up all kinds of good hometown feelings.......
Open the Igloo cooler and twist open a Bud Lite.
Now that's the life!

I don't think I have ever seen a Bud in Madrid. This must be wrong. I am sure it exists... but not that I would notice. I actually hate beer. I know - I know. :) But I promise I can down the wine!