the FIRST site we visited in Prague: 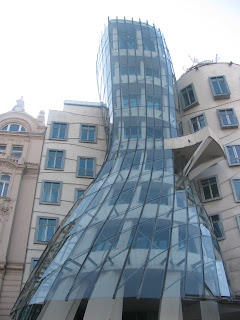 I knew this was called the "Dancing House" prior to my arrival and so it was at the top of my list of things to see in Prague. However, once we got there, I realized there was more to this building than just the fact that it stood out, architecturally, from the rest of the city....

The reason that I did not originally realize that there was more to this than it merely being the "Dancing House" was because this first picture I took did not capture the full concept that the designer had intended.....Shame on me!


To get the full understanding of this architectural idea, you have to cross the street....yeah, ALL the way to the other side and then look back at the building (this was what Zack--Lisa's son made us do).... he led us across several crosswalks and instructed us to stand on what seemed like the farthest point from the building and then he told us to turn around... and THIS is what we saw: 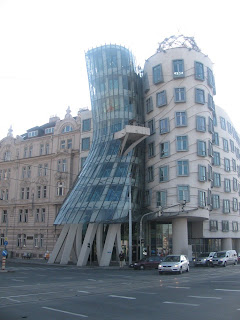 The building has only been nicknamed the Dancing House, but its original name was
FRED and GINGER.
Now are you having the same aha that I had?
Do you "get it"? :-)

Look at the bodies of the building... how they are perpetually swaying with one another. As you stand across the street, looking back on this building, you really can feel what the architect had in mind. And if you want the REAL effect,
click HERE for a 360 panoramic view!

It really is something to see !
Another one of those architectural oddities that tourists find themselves drawn to because you know that SOMEWHERE there is a story... a story that explains why Frank O. Gehry, a Czech architect, wanted to create a building in the middle of Prague to symbolize the dancing bodies of Fred Astaire and Ginger Rogers.....

Wow! I have loved looking at your Prague posts. My mother and I are planning a trip in the beginning of 2012 and Prague is definitely on the "maybe" list. You are convincing me!

Aha indeed! How cute and cool is that?!

Your pictures of Prague are wonderful and thank you for all the little history lessons. I enjoyed my arm chair visit!

Kristen,
I have been a lot of places in Europe, but Prague is a MUST SEE. For everyone! :-)

Prague is so beautiful; I am sure we will return there at some point!