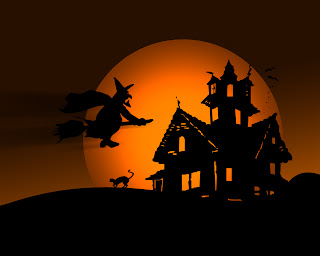 Am I the only American living an expat life that DOES NOT miss Halloween? I am not sure if it is because I don't have small children??? Or the fact that, other than trick or treating, we did not really celebrate Halloween as I was growing up?? No clue, but to me, today is just October 31... and it was not until I logged onto Facebook and saw all the "Happy Halloween" wishes that I realized it was today.

I kind of miss Halloween for all the fun stuff like carving pumpkins. (My neighbors would probably have a collective heart attack if I set a candle in a pumpkin in the stairwell, they'd have not a clue! Hm, ideas for next year...) I don't miss people ringing incessantly on the doorbell, especially after we were grown and my parents purposefully did not hang Halloween decorations and kept the lights off around the house during Trick-or-Treating. Hello, hint anyone?!

But I did watch Hocus Pocus the other day, because Halloween movies are some of the BEST!

I am a Canadian expat, who may or may not have shed a tear or two about missing Halloween...haha. Call me crazy, but it is one of my faves!

No - not just you! And I even have 2 small children. I was feeling pretty guilty, though, as my expat friend decorated their hallways and windows with cut-out bats and spiders. I just really don't care. I broke down on Sat. and bought a very tiny pumpkin for the kids to carve. I admit that I like the look of it shining in the window at night. But that has more to do with candles and darkness than Halloween. The only American holiday I really, truly miss is Thanksgiving.

Nope! It's not just you! I thought it was just me, because I work all day with school-age kids and then to have them knock on your door at home...no, thanks! ;) I do miss candy corn, though.

I do know other American expats who do not miss Halloween, so you aren't alone.

That said, I miss it, because I miss dressing up and going to parties. I also miss trick-or-treating with friends and now that I have a little one, I wish I could dress her up and take her around - not so much for the free candy, but for the fun of running into people I know and comparing costumes and being wicked impressed with some people's creativeness! In my parent's town there is a fantastic Halloween party held by the Lion's Club or Boosters or something, in the city hall, with a haunted house at one end and lots of games to play for candy prized. I loved going when I was little and had so much fun volunteering when I was older ('cause then you could dress up and no one thought you were trying to extort candy). It was a community event and gosh I miss it so!

I don't like the dark side of it. My neighbors put up thousands of decorations and my kids are jealous. Such is life.

Yeah, I'm kinda fine without it! Candy's awesome and all that, but freezing my ass off all around Denton to get it wasn't my idea of fun I guess. Never been to a Halloween party either. Meh. Any old get-together with wine is fine with me :)

I think it is fun with the decorations and dressing up!

I didn't miss it this year. I think if I were younger, I would have.