When you know the history of a country, it allows you to see the artist expressions throughout the country with new eyes. Thoreau taught us so much about Civil Disobedience and I think it is important that when you visit a country that has the kind of history that the Czech Republic has, it is critical that you know that history so that you can see things like ART as acts of Civil Disobedience rather than acts of either hooliganism or weird & tasteless "art".  Those kinds of eyes help you to APPRECIATE rather than judge. 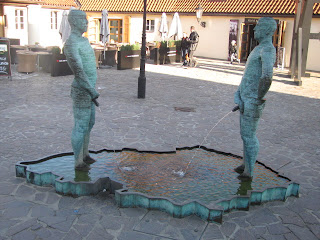 For example David Černý (famous CZ sculptor)'s statue of the "peeing men" could be seen as something tasteless and crude. But I encourage you to look closer. Did you know that Černý is Jewish? And did you notice that the 2 men are peeing into a pool that is in the shape of the Czech Republic?


And what about his sculptures of the "Bronze Babies"? Many would see them as larger than life sculptures in the park that their kids could climb on..... but did you notice that the face of the baby is a UPC barcode? 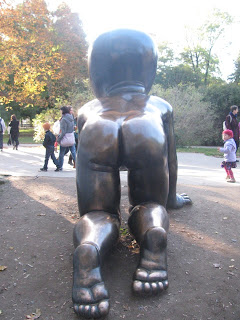 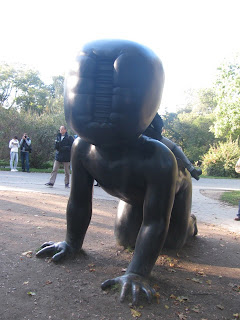 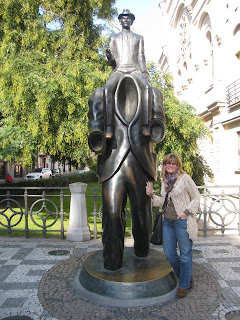 And then of course we must see the Kafka statue. It was, on the day we visited, like DK's Little Mermaid...surrounded by tourist groups, all listening to stories about it while each person waits his turn for a picture with the famous structure. But do all of those that take their pictures realize what the statue represents? Do they realize that its placement in Prague, only a few feet from both the oldest functioning synagogue in the world (from the 1200s) AND a Christian church says more than just who Kafka was. And the fact that the "suit" upon whose soldiers Kafka rides is faceless says even more...


In fact many literary critics work tirelessly to try and interpret his writings...is it modernism....is it magical realism.... does the fact that his works have so much hopelessness in them mean that there are elements of existentialism in them?? But couldn't we be less literary critical (yes, the English teacher said that...) and FIRST learn of his life before we read his works. I don't think they were meant to be analyzed in the way of traditional literature... I think they were meant to be shared, somehow understood and definitely remembered. But that is just my opinion.


And then last, but not least, on our trip through Prague was the John Lennon Wall. In fact, we spent our last moments in Prague headed to the wall because it was "the last thing on my list we had not seen yet"....The wall represents the constant battle between those fighting for peace in a civilly disobedient way and those against whom they were fighting. Look at the wikipedia link above because it has a fantastic picture that has since been covered... the picture is a perfect way of capturing the word "coexist". 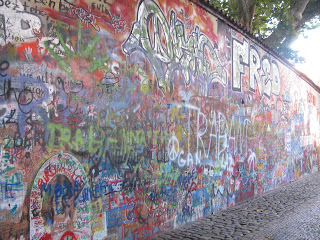 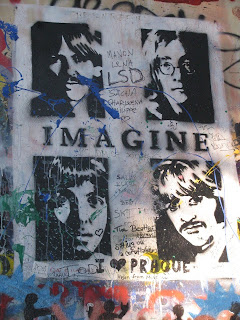 and I love that on this view you can see "FRED" and to most people it looks like someone named Fred tagged the wall with his name....but as soon as Mads and I saw it, we both jumped to the conclusion that a Dane had stood in the same spot as we were now standing because in Danish "fred" means PEACE. 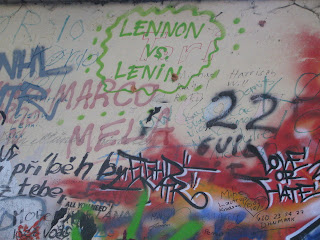 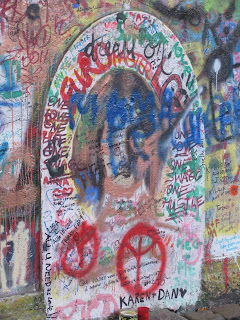 Love that wall! So hopeful. (Fred means peace in Swedish too.)

Haha, I love it! I have heard about all the crazy statues there. That peeing one is great. The hubs would really get a kick out of that one. We are mature like that ;)

David Cerny has quite a number of cool sculptures around Prague, a number of them are a bit hidden.

By the peeing men there use to be a sign with a phone number on and you could send them a text and they would spell out the words you sent to that number. I think they took it down now but the patterns they pee in are still letters so they are probably spelling out something.

Did you make it inside the Kafka museum?

The bronze babies are the same (size at least) as the ones that are crawling on the TV Tower in the East of town. http://www.flickr.com/photos/fotofrivolity08/3893087016/

The "peeing men" are peeing into a pool that is in shape of Czech republic, not Czechoslovakia.
I think I need to go to Prague one more time - it seems I missed a lot the first time :-)

Michael, our friends told us about the SMS gig at the statues, but it was no longer activated...

And when we came across the babies in the park, I had not known about them...only about the ones on the TV tower, so this was like a bonus. :-)

Oh wow - what a cool city. I wanted to visit Prague but it didn't work out. So grateful to see your fabulous posts.

I got your note re: Seattle - I'll send you an email. Would love to meet up!

Prague sounds like a lot of fun to explore!

This is kind of random, but I painted some of the John Lennon wall in your photo in May.

I've been searching for photos of how the John Lennon wall has changed since I left Prague. It is such a fantastic testament to love and unity.
I am glad I found your blog post.