This weekend Queen Margrethe celebrated her 40th year as Queen of Denmark. To say that there were lots of celebrations throughout Copenhagen this weekend would be putting it mildly.

Here is a video from 1972, when she was named the ruling monarch of Denmark..... Even if you don't understand the language, watch the video and listen for one thing... the traditional Danish HURRA HURRA HURRA....... and look at the number of people gathered in front of Amalienborg Castle to welcome her as their new queen.

Even then she was already a Royal Leader OF THE PEOPLE.... and she has continued to be just that through the last 40 years.


And that is evident in how the people of Denmark showed up this weekend to congratulate her on this important day and to THANK HER for her service to Denmark and the Danish people.... 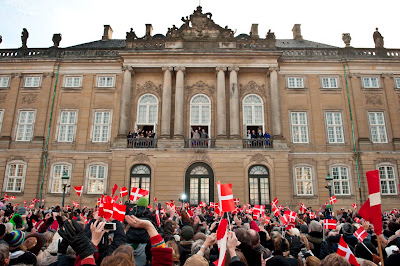 I do love being an American.... but I have to admit... living in a country with a Monarchy is a pretty cool thing---especially when the members of that Monarchy are so accessible to the people.The Danish Monarchy has existed for more than 1000 years and is one of the oldest in the world, and in my opinion, that is an incredibly cool thing!
TILLYKKE MED din 40-års Jubilæum,

And just a bit more info for you...
our future king (Frederik) is to the left of Queen Margrethe...

and the king that will follow Frederik is this guy:
His Royal Highness Prince Christian. Again, pretty cool, huh? 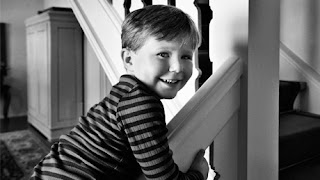 I hear ya Kelli, the royals are interesting for sure! I think their own people have a hate/love relationship to them also...they complain about how much money they spend and they love that they symbolize their countries in such impressive ways.
I hope I live long enough to watch one of the crown princes (either in Denmark or Norway) take over and become King in their respective countries...that would be cool....

We saw this in our paper too - all crowded onto the palace balcony.

It was so cool to be living in a country with a monarchy. I guess technically Canada is under the British one, but it is just not the same. I love royals, and I love iiving in the same city as their summer house even better! Royal families never cease to fascinate me.