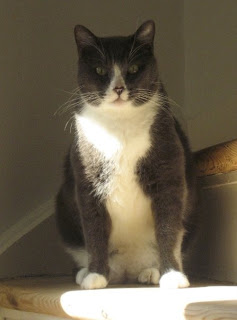 More than fourteen years ago, I brought a stray kitten home to be a part of our family and today I have to tell him good-bye. 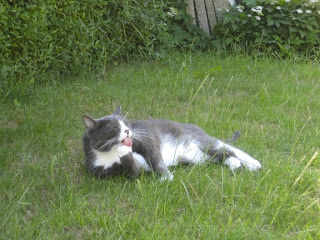 It was not even a month ago that we found the tumor on Emmitt's forehead, but it feels like such a long journey as I've watched my precious companion disappear a little more from me each day.

The hardest part of his getting sick was watching his incrediby predictable routine disappear as well.

No more meowing at us from the bottom of the stairs on a Saturday morning at 630am because he was afraid we'd overslept.

No more following us into the bathroom every time one of us needed to go because he was thirsty and demanded that he be lifted up to drink from the sink. 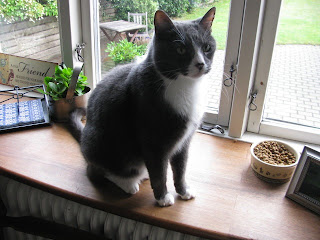 No more glancing over at "his" window in the kitchen to see that he was suddenly sitting there, so perfectly, as if saying to us, "I am sitting here with perfect posture, like a real gentleman, waiting for you people to notice and give me one of those awesome cat treats that we import from America". 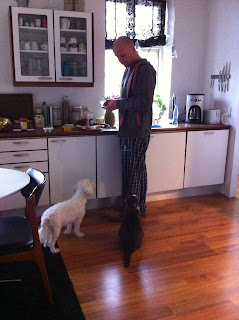 No more nearly stepping on him because he magically appeared at the fridge when we opened it because he was certain our opening it meant his getting a piece of that thinly sliced ham he loved so much.

No more hollering "it's bedtime" to him from upstairs once the three of us were in bed and then listening for the thunder of his footsteps as he bolted up there to us as he would always spend the first moments of bedtime with us before he headed back downstairs to do whatever he did while we slept. 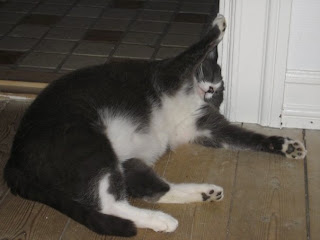 And no more standing at the back door on one of those Danish summer nights when the sun is still up after 10, hollering, "Emmittt, it's time to come in!!" And there he came... Scaling the fence from the neighbor's yard, running toward us like a lion running across the savanna. 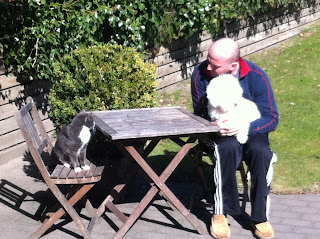 I cannot believe that in 2008, for a fleeting moment, I considered not bringing him with me to Denmark because I was afraid he might be too old to make the journey. Because quite frankly, his last four years in Denmark might possibly have been the best four years of his life because that's when he got to become "Mads' boy"..... And that's when I learned that someone else can love my boys as much as I do.

After Emmitt's diagnosis we struggled with what course of treatment to follow; what treatment was best for him. And I'm so thankful for those friends (who had been in these shoes before) who assured me that Emmitt would let me know what was the right thing to do and that Emmitt would let me know when it was time to let him go. For the last seven nights, as he slept in my arms, I prayed that when it was time, he would just quietly pass in the night....in fact I would tell him each night that it was ok...that he could stop fighting now. 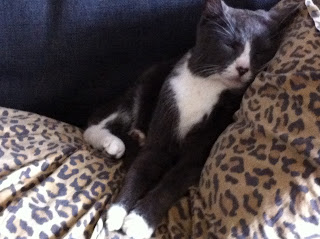 But on Saturday morning I realized that, as the mom, this was a decision I had to make.
I am the one who brought him home that day in February 1998 and it's my responsibility to let him go now. 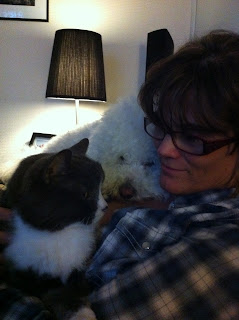 He's been with me exactly 1/3 of my life....
And although I cannot imagine my days without him, I am so thankful for the years that he was a part of my life and a part of our family.

We love you, Emmittt.
And I thank you for all the joy you've brought us the last fourteen years. You can rest in peace, knowing how much you blessed our lives.
at 2:05 AM

This is beautiful Kelli. Thanks for sharing Emmitt with us.

im so sorry to hear about this kelli :( my thoughts and prayers are with yall :(

It's awful to have to say goodbye to such a good friend. Alot has burrowed his head under my arm just now and I'm pretty sure that in about 30 seconds he's going to be disturbed from his nap when I scoop him up to give him hugs and kisses.

Hugs to you in your time of loss!

What a sweet post that brought a few tears to my eyes. I am so sorry you had to make the decision but I have been there a few times myself. Even though it is hard, you just know when it is the right thing to do. Hopefully he will get to meet my Pinky and Little Kitty in kitty heaven.

I'm so sorry for you loss Kelli, I loved reading your posts about this wonderful little cat. I'm sure Emmitt will be safe and happy across the rainbow bridge.

This is an absolutely beautiful testament to Emmitt. I'll be thinking of you guys today, letting go of a family member is so very hard. Emmitt was fortunate to find you, so he could be in a family that loved him so much.

I am so sorry, Kelli. I am thinking of you and I wish you all the strength you need now. You are the best kitty-mom I can imagine and I can see how much you love him and that you have always been there for Emmitt. And Emmitt knows all this too. I had to make the same decision a couple of years ago and I know how hard it is! I am thinking of you all!

I know exactly what you're going through, having said goodbye to 3 of mine in the short 5 years that I have been here. You have written a wonderful tribute to him and you have given him a wonderful life.

I remember the morning we went over to your apt for breakfast before Emmitt & Albert headed to Denmark to make their new home. It was as if he knew he was going and this was our last chance to connect.....it was a special moment when he decided to warm up to me after many years of us being 'allergic' to each other. He has been a good friend to you and I know you, Mads & Albert will miss him. Although this is difficult, memories will be sweet. Love ya, Mom

Such a beautiful testament to Emmitt.
We always have enjoyed the pictures that you've posted, he seemed like such a cool cat.
Pets become so close, dear friends - and as much as they are loved for everything that they are, just as much is the heartache when it's time to say goodbye.
I think you did the right thing, making the decision to let him go. It's a tough one, but a neccessary one. It's something we do out of respect of someone we love. It's something we do even though it's so tempting to hang on until the very end.
Thank you for showing your dear friend the respect and helping him onwards. Like you wrote, he'd let you know when it was time.
My thoughts are with you all.

So beautifully written Kelli. Can't stop crying! I am deeply sorry for the loss! God Bless!

I´m sitting here with tears in my eyes. Never having met Emmitt, I completely understand the love you have for him and how hard this is for you..because I´ve had that love before and I´ve been in your position before.

My heart goes out to you and Mads and for the loss you´re going through hopefully in time you can think back on all the memories with Emmitt and smile and until the day when you and Emmitt can be together again I am sure my mom will watch over him for you...she was an animal lover like me and I´m sure she is watching all my fur babies I´ve had to let go over the years...so Emmitt will be in good hands...

A big warm hug Kelli...can´t tell you how much I wish I could give you a real hug right now...

You had a good run together. Thanks for sharing, and so sorry for your loss.

I'm so sorry. We brought our two dogs across the world, and it too was the best decision for our family. You were a good mommy and loved him wholeheartedly.
((hugs))

Kelli, I read our post about giving up Emmitt with tears in my eyes. I will say a prayer that you will adjust but will always remember good times and funny times with your furry little Emmitt. Thanks for sharing.

This entry had me in tears, Kelli!
It was so sweet. <3
Our pets are such special little members of our families, aren't they? I don't know what I would do without them in my life, so I totally feel your grief over the loss of your precious expat boy.

God bless, Emmitt. He's in a better place now, I'm a firm believer of that.

Love you, Kell. Praying for you and Mads while you're missing your little one.

What a lovely tribute. I think i used all my kleenex

Tears are streaming down my eyes as I read this beautiful tribute to Emmitt.

I'm so very very sorry for your loss - our pets are our family and their only fault is that they are with us for too short a time.

It's never an easy thing to say good-bye, but it is the price we pay for all the love. You gave Emmitt a great life. He could have had no better.

I've read this twice and cried both times. Glad Emmitt came to DK, too! I think he liked having a back yard. :-)

I am so sorry to read this. I know how hard it is to lose a pet. Best thing is that Emmitt is no longer suffering now.