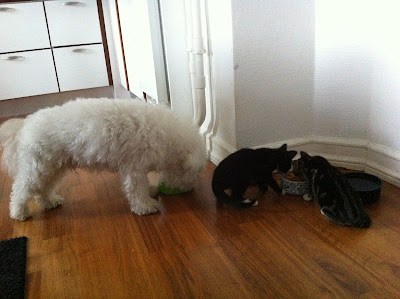 Here is a picture of yesterday evening at the Nørgaards' house. We fed everyone his/her own food in his/her own bowl, but what ended up happening was the two kittens thought the cheese on Albert's dog food looked delicious, so they moseyed over there, leaving him with no choice but to try their food. And as you can see from the picture, everyone seems pretty happy and pretty content.


I wish that differences in political views were handled the same way. I know this is a very simplistic view of things, but why can't folks realize that their own kind of food is not the ONLY kind of food? That there are other kinds of food out there that others find to be delicious. And that if we just TASTE them once, we might find that we can find some delicious elements in them as well (with the definite exclusion of leverpostej!!!)


Yes, I know that the HEALTHCARE SYSTEM is something much bigger than food. But don't we need both to survive? My European friends and family honestly cannot understand why so many Americans are so opposed to the healthcare system proposed by Obama (if you don't believe me, check out the dialogue I have been, ummmm, facilitating on my facebook wall! LOL) And even more how these same Americans could be considering voting for someone other than Obama. But that is because all of my European friends and family ONLY KNOW what their own food tastes like (and it tastes A LOT like what Obama is serving!!)


At the same time, my American friends and family cannot fathom why the Europeans are so curious about the American political agendas and why they are so opinionated about it.... but it is because the Europeans want to share the amazingness of their own dish with others because it has sustained them for so long.


So who is right?
BOTH.
But both sides cannot see that both sides are right.
I know that what works in Denmark CANNOT work in the US...at least not just yet. You cannot turn a ship with 300,000,000+ people who have done something the same way for 200+ years overnight (or in one presidential term).


But both systems, the US and Danish, should constantly be looking at each other to see if there is something they can LEARN from each other in order to IMPROVE for the benefit of their citizens.


After living in a welfare society for 4+ years, I can see the VALUE in what Obama is proposing for the American people. It is not a perfect solution, but it has definite MERIT because it is an attempt to take care of ALL the countries' citizens. Had I NOT lived in DK for the last 4+ years, I am sure I would think it was crazy, but now I have seen what it looks like when your entire society is taken care of.....  Yes, I HATE my high taxes, but I love that I can walk my dog after midnight without fear of being the victim of a crime. I truly love the residual effects of those high taxes.... But Americans who have NOT lived in DK cannot truly understand that.....and they should not be faulted for it because they have not TASTED it yet.


So yep, my view is simplistic.
But I am pretty sure that there is some merit to it.
You never know..... when you taste another guy's dinner, you might find something even better than you imagined.
at 1:49 AM

I know what you mean entirely, Kelli...

Coming from a very conservative, traditional Midwestern family (who I adore, no matter our different views!), with me now living in Scandinavia, their minds have been blown a few different times recently especially when they hear how the birthing industry differs here...

Hopefully someday all the citizens in our homeland will be able to be as well-cared-for as those in Scandinavia tend to be!

I think you are almost right in what you say about Europeans' idea of the American healthcare system. Most people really do not know what it's like except what we see in movies and hear in the news. That's mostly about how expensive it all is. How you need to be wealthy to be able to afford to go to the doctor or dentist.
And here we are constantly told by our politicians and WHO and other organisations that studies show we have a very good system. But it's not the best, we don't have the best doctors in the world, we do have long waitinglists, mistakes do happen and doctors only get slaps on the wrist and the patient only a letter of regret - MAYBE.
What most don't know about the US is that there ARE places where poor people can go to get medical help. And if you have some money or a good healthcare plan then you also have access to some of the best doctors in the entire world.
If only we could combine the two put them in a juicer and retrieve the best and leave out the pulp, then I think we could all be happy.

aw i loved your opinion on this! im personally against what obama implemented in the US but am all for american healthcare reform (i just dont like the way he reformed it). in a perfect world...everyone would have 'free' healthcare without the action of higher taxes, but realistically, that would not work anywhere. so its bittersweet. i grew up with amazing healthcare here in the US so i am sure if i had none or one of lesser value, id be more amped for socialized medicine in the US. i see both sides...and i think socialized medicine works well for norway...but the system certainly has loads of flaws. and i think while americans think they can get free healthcare, they dont realize that it is ANYTHING but free! but we'll see!!! while i disagree with obama's implementation, id be unamerican if i was to wish for it to fail. i hope it works and does what he intends for it to do (except run more govt control over people which im against!) :) i love seeing other poeple's views on it as long as they can understand both sides so thanks for this :)

and i have to agree with what lars says up there about there are places people that are poor in the US can get healthcare at NO cost. people in europe dont know this so they often judge before knowing more about the US system. the US system is certainly flawed...but its not completely broken...i blame it on the laziness of the society half the time (for example...my lazy cousin didnt register for state health insurance b/c he was too lazy to fill out the paperwork that went along with it). both systems certainly have their plus and minuses! i just get annoyed with norwegians trying to critique the US one w/out knowledge of the intricacy that comes along with it...AND without realizing that a country of 5 million should never be compared to a country with 310 million haha :)

I am often trying to get just some idea of american politics, it is the number 1 superpower in the world, and they have shown a number of times that they are not against using military power. I think that we all should get a vote in the election, one man with all that power is a bit frightning, just my 25 øre.

Your animals are right. It's all about the cheese.

I don't see how population size should make all that much difference. China went from a Communist system to ultra Free Market in about 20 years, and they've had over a billion people through out this...to put it mildly... radical change.

So yes, Megan, you can compare a nation of 5 million to one of 310 million and still ask meaningful questions about why one type of society isn't like the other.

i agree that one country can learn from another but lets not kid ourselves here...a country of 5 million people is drastically different than a country of 310 million people. there are different cultures, different roots, different ideals, different values...and the list goes on and on. if the US was to encourage certain laws of theirs on denmark (i live in norway and really dont know where you live so im going to assume its denmark), how would you react knowing that their are different backgrounds and different ideals in such a society? probably not well b/c you have different beliefs, which is why we have different cultures and customs around the world. im all for trying to create perfection by grabbing what works in one country and helping the US adapt it to better the american society...but as europeans throw in my face on a daily basis all the things that they think would work so well in the US, i think people need to sometimes take a step back and realize the society, population, and people you're dealing with before just 'assuming' that things will work well in the US too.

like i mentioned above...im all for a healthcare reform. socialized medicine...maybe not for the US right now unless a better reform takes place. i personally dont think obama's 'tax' is the only thing that will turn american healthcare around since it really doesnt improve the system as is. but im hopeful for the best of course.

and sorry for my grammar and spelling kelli haha :) it's gotten horrific this last year and i have just given up.

My 2 cents: Safe affordable housing, safe affordable food and water, safe affordable heathcare for every citizen on the planet is a Human Right now. That's my 2 Cents Danish view. Bucky Fuller said we can do it and told us how. I wish everyone would listen to the TED conferences. ;-)