Waiting for permission to exhale

I believe that when governments, schools, organizations, or teams impose rules or guidelines that they do not have the manpower (OR BRAINS) to actually enforce and/or regulate, THEY SHOULD BE FINED and not allowed to impose anymore rules for at least 12 months.

If we, in our daily lives, were as ridiculously incompetent at doing what we are SUPPOSED TO BE DOING, we would be DISMISSED.  So why can't the same happen to government offices and programs when they cannot manage to remove their heads from their rear-ends long enough to actually do the job they were tasked to do (the job that THEY THEMSELVES CREATED FOR THEMSELVES!!!).

Curiosity piqued?
Any idea WHICH government I am talking about?
Sad that it could be so many.....

In 2010 a POINT SYSTEM was imposed on the immigrants in Denmark---demanding that we accrue at least 100 points in order to receive our permanent residency permit (which since then, I have learned does not actually mean "permanent", but that is a blog for another day!) Once these regulations (stupid or not) were put into place, I began accruing.

I followed the immigration rule that says you cannot apply sooner than 60 days of your current residency expiring, but you must indeed apply BEFORE it actually does expire. In fact, I followed ALL their rules and then on April 10, 2012 I submitted the 40+ page package to the Danish Immigration Service....proof of my 100 points....proof of my JUMPING THROUGH ALL THIS OFFICE'S HOOPS in order to be allowed to stay in Denmark "permanently".

The Immigration Office's website says that we should expect the full processing of all Permanent Residency Apps to take UP TO SEVEN MONTHS (that in itself is ridiculous since during that time we have to have SPECIAL STAMPS in our passport to be allowed to leave and come back to DK). However, I knew going into this that the 7 months was what they said I should expect to wait. 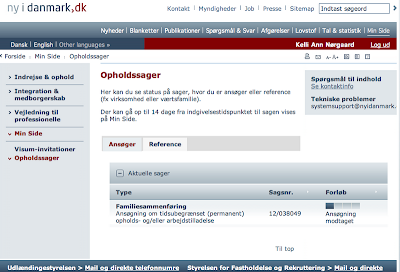 So I logged onto the system today, just on the off chance that there might be some good news and guess what I found?!

How hard would it be for them to OPEN my file (since we know that it has indeed been received!) and compare what I sent to that magical checklist that they have?! Nope, not hard at all because I sent it in JUST AS THEY TOLD ME TO.

If you call to question the status of your app, they tell you how swamped they are and how they don't have enough people to manage the number of applications.... so again, should you be allowed to impose RULES AND REGS that you cannot manage or enforce?

I won't spend time complaining about the fact that on May 1, 2012, TWENTY DAYS AFTER I SUBMITTED MY APP, the point system and 3600dkk fee which I paid were canceled. They can KEEP my money (which of course, they will!) and use it to find more people to actually OPEN MY FILE instead of just being able to RECEIVE IT.

"He that can have patience can have what he will."

"Beer is proof that God loves us and wants us to be happy."

I ditto everything you said! The information under "Min SIde" on my application still states that they're waiting for extra information, which was sent in April!!!!

I just stumbled across your blog. It's very interesting to learn about Denmark from a fresh perspective. I guess this situation goes to show that governments everywhere have red tape that the workers are none-too-quick to work through. I hope your application gets reviewed soon :-/