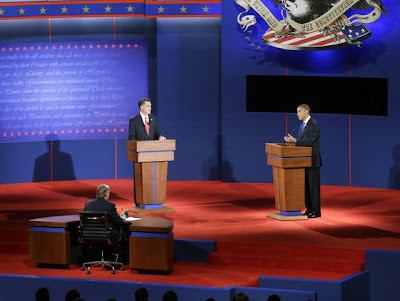 I planned this trip around the birth of Corrie, so of course the last thing on my mind as I headed to the US last week was that I was entering the ELECTION ZONE!

I have not only found myself a bit overwhelmed by the barrage of campaign signage all over the  place, but I also found myself planted in front of the TV on Wednesday night, tuned in to the first of three Presidential Debates--even though there was a Law & Order marathon on another channel!

I have also found myself in engaging in quite a few conversations/discussions/oh heck, DEBATES about the differences in the two candidates.

But this blog is not about the candidate that I am supporting; rather, it is about how broad I feel that my perspective has become related to all the issues that were debated on Wednesday night since living in Denmark the last 4 1/2 years.

And while most people know exactly where I stand on the issue of Obama v. Romney or the issue of socialistic-like healthcare v. healthcare as the US currently has it, the bigger issue is really how much I have learned by living in these two very different kinds of societies.

There are things I think Denmark does better and there are things that I think the US does better-- but the best part of both of these "betters" is that they have made me more informed, more open, and I think, just a little bit smarter.
at 11:34 PM

But yeah... it's interesting how we change after some years abroad.

I for example never considered the Danes opinionated and often too willing to offer their opinion before I had lived in Switzerland for some years and then returned back home again, when that sometimes stood out like a sore thumb. I don't always need to know what is on someone's mind or what they think about what I am doing - especially if I didn't ask in the first place. :p

i think it is awesome you have been able to better inform yourself of these things :) i have done the same since living in norway. while i never had a bad experience with healthcare in the US, i still know many people have. i havent had any experience with healthcare (yet) in norway so i cant really judge it (all i know is its damn expensive to have socialized medicine in terms of taxes, etc). but its less worry... :)

its so nice to see people voting that have a truly sound and educated view...even if it doesnt align 100% with mine. wish all americans would educate themselves more properly so their decisions are informed and not just voting for who they 'like' best or who they are supposed to vote for given where they grew up.

a big problem, I think, is that you basically only have a two-party system in the US where as in Norway and Denmark (and many other places) have many many more parties to choose from. This way we have the option of finding that one party that most likely has views matching our own. In the US I find it's often a matter of choosing between the lesser of two evils.
Imagine if you went to buy a car and the option was only bright yellow or bright pink. Now most would never choose either but you need to drive to work so you have to choose one.
If you had the entire rainbow of colors that choice would be if not easier then at least better as you could choose the one closer to your hearts desire.
Choosing between plague or chollera is no fun if what you want is a simple cold :-)

Agreed - travel really does open up the mind!

Henry and I just had a US vs DK political conversation last night. Now, I am not very politically minded at all, but I have noticed a big difference on my views and attitudes towards politics since living in a foreign country. Little political lessons happen all the time and always when you least expect them.