Where is the mercy??

According to Webster's Dictionary, MERCY is defined as: 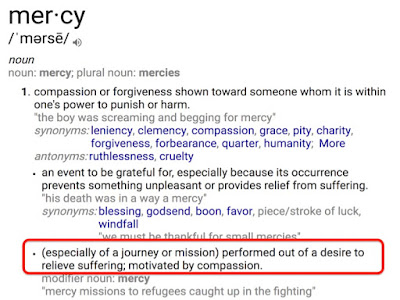 As a girl who grew up in the church, I have heard about MERCY my entire life. It was mostly through hackneyed phrases like: "Our God is a merciful god", or God have mercy on you" or "May God's mercy give you peace" and for about the first 3 decades of my life, I think I believed in the premise behind each of them.

But now as I sit at the side of my dying father, I am wondering WHERE IN THE HELL is this mercy that everyone has spoken about for my entire existence? I especially want to know about that mercy advertised in the third use of the word above (in red).

My dad, along with the other 9 members of our tribe, had already resigned ourselves to the fact that his esophageal cancer had returned and that he was not going to beat it this time. We carpe-diemed the heck out of life the last year. But then 14 days ago, my dad made the deliberate choice to stop the feedings in his feeding tube because he said he was done. He told me to get my sister and her family here because he just could not fight this any longer.

His weakened body dropped to less than 100 pounds in a matter of weeks. His organs started to weaken. He began showing all those signs that you learn about when a family member goes into some kind of palliative care.

But even though his body was declining rapidly these last 2 weeks, his mind was still just like it had always been. He talked with us, he reminded us of things that he wanted us to know, and he just (mentally) enjoyed being with all of us.  Then last Thursday, he took my hand in his right hand and my sister's hand in his left hand and said it was time. He told us he would "see us over there" and that he was going to mom. We gave him our full blessing, kissed his face, and held his hands for the hours that followed.

He is in pain.
He is, in almost every sense of the word, gone.
But his heart just will not stop.

So that is the reason for my question of
WHERE IN THE HELL IS THE MERCY NOW?!

Except wait...
He is not on any kind of life support.
And we live in Texas.

So because Texas legislators, who have most likely NEVER WATCHED A LOVED ONE SUFFER as they TRY TO DIE, deemed assisted dying laws to be illegal, we have nothing to do but sit.

We sit.
We massage his hands.
We give him his pain meds every hour on the hour.
We whisper to him that it's ok to let go.
We reassure him that we are going to be ok.
We give his heart permission to quit working.
We count the seconds between his breaths.
We watch his chest rise and fall once or twice a minute.
And we cry.

So quite frankly, you can keep your mercy.
I truly don't believe in its existence anymore.
Because if it existed and if there was truly a deity dispensing it out onto those he loves and cherishes, Mike Rogers would be walking hand in hand with his sweet Dee, whose been waiting for him the last four years.

Kelli, I am so sorry you are having to endure this again. Sending love, HUGS and prayers.